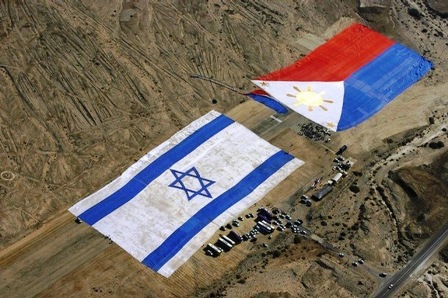 MACTAN, Philippines — I’ve always been fascinated by how well the Israeli Defense Force, otherwise known as the IDF, delivers emergency response medical care in extremely poor conditions.  My first experience with the IDF was in Haiti after the devastation of the earthquake there. They were remarkable then, triaging and treating patients in the midst of the devastation.

I wondered if they had found their way here — so we set off to find them. And when we did, it was in a place we least expected.

The IDF had selected Bogo, a small village on the northern island of Mactan, to establish its emergency response center. Bogo had been hard hit by the devastation but it hadn’t attracted as much attention as other towns.  It was definitely off the beaten path.

I knew we had found the IDF medical team as soon as we arrived at the hospital where they were working.  A fence surrounded the grounds; soldiers were stationed at the entry and sharp shooters were visible from rooftops.  Security is of paramount importance to the Israelis and they will survey potential sites for days to before one is selected.

As we walked up to the tent where incoming patients were being processed, I immediately saw the electronic medical records technology that I had first seen in Haiti.   Each patient’s medical record is created using a photograph to ensure accurate identification. This is especially important in these types of crisis situations. Language barriers, loss of documentation and the fact that patients have arrived from all over would result in a nightmare if the patients weren’t properly identified.

Smart. Sophisticated. Secure. This was what I had experienced with the IDF before.  But now I was impressed with something else: the place they had selected. This wasn’t a site where trauma surgeons were needed — those injuries in other towns were being addressed.  What the people of Bogo needed was good, solid medical care.  They were already living in poverty when the typhoon decimated their fragile infrastructure.

I asked the IDF Surgeon General in charge why they chose Bogo.  He said it was because they were poor and their needs were great. As I left, I walked away in awe of this group of doctors: physician humanitarians, and medicine at its very best.