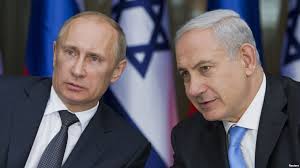 Israeli Prime Minister Bibi Netanyahu spoke with Russian President Vladimir Putin on the phone Wednesday to express condolences over the Russian plane crash in the Sinai that killed 224 people. Islamic State claimed that it shot down the aircraft.

Netanyahu and Putin discussed the situation in Syria and agreed to meet in 10 days at the upcoming climate conference in Paris to further discuss the Syrian civil war.