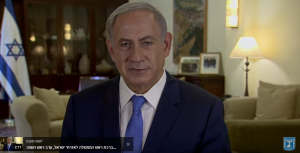 In the background of the wave of terror, increased protests among Israeli Arabs, rocket fire, and Palestinian demonstrations along the Gazan border, the Knesset convened today with the participation of Israeli Prime Minister Bibi Netanyahu.

Netanyahu accused the Arab MKs of engaging in incitement that led to violence in his speech and he called upon Israeli Arab citizens to renounce them: “MK Ghattas stated that because the Henkin’s were settlers, they were not innocent victims of a crime. If this is so, is it permissible to murder them?”

“Mk Zoabi does not limit herself to settlers,” he noted. “She justifies all acts of terrorism. She spoke like a Hamas mouthpiece only the day before yesterday when she stated that lone acts aren’t enough and what is needed is a full intifada. Israeli citizens call out during a time of terror attacks against other Israeli citizens and there is not a thing that is more justified than opening a criminal investigation against them.”

Netanyahu stressed that his government is working on all fronts against the wave of terrorism: “I ordered the massive reinforcement of troops. I added battalions to the Border Police in Judea and Samaria, Jerusalem and all across the country. We entered into neighborhoods in East Jerusalem, destroyed terrorist homes, worked against incitement, made arrests, and worked to outlaw the Islamic Movement. We changed the rules of engagement regarding the opening of fire on people that throw stones and Molotov cocktails that have taken the lives of Israeli citizens.”

“Terrorism does not stem from the lack of progress in the peace process but out of the desire for our annihilation,” he stressed. “More than a thousand Israelis were murdered when buses exploded and suicide bombing attacks took place during the Second Intifada. The terrorism of suicide bombers did not defeat us then. Neither will the terrorism of the knives defeat us today. This is our home. This is our homeland. Our desire for life will defeat the growing desire for death by our enemies. They won’t succeed to destroy the State of Israel. There is no way to stop the Zionist project.”