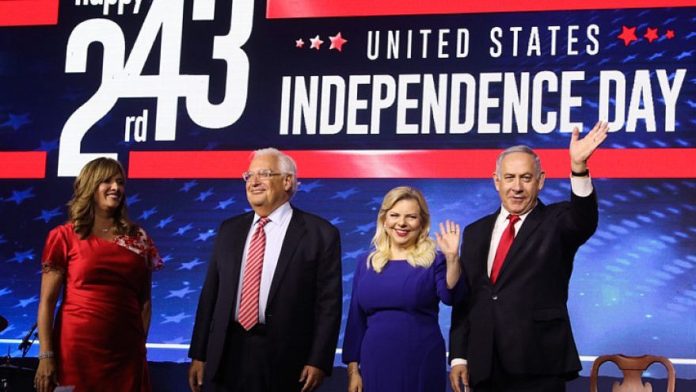 Prime Minister Benjamin Netanyahu and his wife, Sara, were guests of U.S. Ambassador David Friedman at a 4th of July party held Tuesday evening at the Jerusalem International Convention Center.

Speaking at the event, the first official U.S. July 4th celebration held in Jerusalem, both Netanyahu and Friedman praised U.S. President Donald Trump for recognizing Jerusalem as the capital of Israel.

Friedman referred to the event as the “biggest Independence Day party ever.”

Friedman also underscored the values that Israel and the United States share, while Netanyahu noted that the alliance between the two countries has reached new heights. Netanyahu said that U.S. support for Israel crossed party lines, and must remain bipartisan.

“A few days ago,” said Netanyahu, “David and Tammy [Friedman] and [U.S. Middle East envoy] Jason Greenblatt and my wife, Sara, went to a place that is the wellspring of our existence. They went to a place that leads from the Siloam pool to Har Habayit [the Temple Mount], where our ancestors celebrated the various festivals of Jerusalem and where the last Jews fighting the Romans, fighting this greatest power on earth, submitted, and where Jewish independence was extinguished.

Netanyahu also expressed his thanks to the government of Bahrain for hosting the U.S.-sponsored Peace to Prosperity workshop last week.

“The foreign minister of Bahrain said Israel is part of the Middle East—’I want the people of Israel, the citizens of Israel, to know that we welcome them.’ That’s a change that should be applauded. It was encouraging to see numerous Arab governments participate in the workshop, despite Palestinian efforts to undermine it,” the prime minister said.