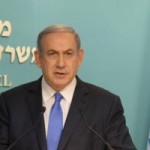 Amid the recent wave of Palestinian terrorism in Israel, Prime Minister Bibi Netanyahu convened a press conference on Thursday to address the deteriorating security situation.

“This terrorism did not begin today,” said Netanyahu. “It has accompanied the Zionist enterprise from its beginning.”

“We will chase them and we will overcome them,” he added.

The prime minister blamed the violence on a campaign of incitement by Hamas (a terror group whose charter already includes bringing about Israel’s destruction), the Islamic Movement in Israel, the Palestinian Authority, and Middle East governments, saying that they are spreading lies about Israel seeking to change the status quo on the Temple Mount when the Jewish state is not planning any such changes.

“We will take aggressive steps against the Islamic Movement in Israel and other inciters,” Netanyahu said.

During the press conference, Netanyahu also encouraged the Israeli Knesset’s opposition leader, Zionist Union party head MK Isaac Herzog, to join a national unity government, saying “there is reason for a wider government” given the instability in the Middle East.