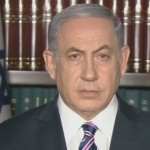 Israeli Prime Minister Bibi Netanyahu has blamed Palestinian incitement for the deadly shooting attack that killed the Henkin couple near Nablus to night. Four of the Henkin children, aged 4 months, 4, 7 and 9, were in the vehicle but but were not hit by the gunfire.

“This is a difficult day for the State of Israel. We witnessed an especially cruel and disgusting murder during which a couple was killed. Parents were killed and their children were left orphans. Our heart goes out to the children,” Netanyahu told Israeli reporters in his Manhattan hotel, in what was his first reaction to the attack.

“The murderers knew they were killing a father and a mother because the children were there,” he said.

“It has been proven again that wild Palestinian incitement leads to acts of terrorism and murder such as we have seen this evening,” he said.

The prime minister added that he spoke Thursday evening with Defense Minister Moshe Ya’alon, IDF chief of staff Gadi Eizenkot and the head of the Shin Bet security service, Yoram Cohen, “not only to discuss locating the murderers but to increase security for all Israeli citizens.”

The murdered couple, Eitam and Naama Henkin, were survived by six children. The attack took place shortly before 9 p.m. between the settlements of Itamar and Elon Moreh, near the Palestinian village of Beit Furik.

The Henkin couple will be laid to rest Friday morning at 11 a.m at Har Hamenuchos in Yerushalayim.

The Israel Defense Forces launched a manhunt for the killers, ordering the deployment of four infantry battalions to aid in the search. The military also began closing off Beit Furik, near the site of the attack, where it is believed the perpetrators are from.

Ya’alon vowed to “put our hands” on the perpetrators of a deadly shooting attack that killed an Israeli couple near Nablus on Thursday night.

“This evening’s lethal attack is the logical continuation of the incitement against the State of Israel and its citizens,” he said in a statement shortly after the attack.

“The war on terror demands of us determination, an iron fist and patience. We are fighting a bloodthirsty enemy, and unfortunately we are suffering losses along the way. As we speak, the IDF and Shin Bet security service are searching for the murderers. We will track them down, and we will not rest until we put our hands on the murderers and those who sent them.”

Opposition chief Isaac Herzog called the killing “reprehensible and very painful. I share in the family’s grief and in the community’s mourning,” he said on Twitter.

In a statement, President Reuven Rivlin focused on the couple’s children.

“Tonight, bloodthirsty murderers claimed the lives of a mother and a father, leaving their young children orphaned. The heart breaks at the magnitude of such cruelty and hatred. We will continue in our brave and unwavering fight against this cruel and heinous terrorism — of this our enemies can be sure. This is our duty, and the only way we can ensure the right of the orphans who lost their parents tonight, along with the right of all our children and grandchildren, to live with security and in peace, everywhere in the Land of Israel,” he said.

“We pray for the speedy recovery of the injured children – our hearts and thoughts are with them.”

The Yesha Council, a West Bank settlement advocacy group, placed the blame for the attack squarely on the Palestinian Authority. “The ongoing incitement of the Palestinian Authority and the bevy of lies and incitement from [PA President Mahmoud Abbas] yesterday at the UN are the direct cause of terror attacks,” the group said in a statement, referring to a fiery speech by Abbas on Wednesday night.

“The Israeli government must offer an unequivocal security response, including the arrest of all inciters, widespread [settlement] construction and the establishment of new communities in every place in which they try to harm us,” the group said.

Deputy Foreign Minister Tzipi Hotovely of the ruling Likud party, currently in New York for the UN General Assembly, also said the attack was a product of Palestinian Authority “incitement,” as did Education Minister Naftali Bennett of the pro-settler Jewish Home party.

“[Abbas’s] marching orders were answered this evening in Israel, and it is red with blood,” Bennett said in a statement. “A nation whose leaders incite murder will never have a state, and that has to be said clearly. The time for talking is over. Now is the time for action.”

MK Moti Yogev (Jewish Home) echoed the accusation, saying the “horrible double murder of this evening is the fruit of incitement from the Palestinian Authority and the man who stands at its head.”

Yogev, who knows the couple personally, vowed that Israel would “deal with the terror with an iron fist.”

“There is nothing heroic about the killing of civilians. The perpetrators of this violent act must be brought to justice,” he said. “In order to avoid escalation all must refrain from inflammatory statements and retaliatory action that can only further exacerbate an already tense environment.

“This tragic incident, once again, highlights the need for significant steps that help stabilize the situation, reverse the current negative trends and restore hope that a just and lasting negotiated two-state solution is possible.”

Minor clashes between Israelis and Palestinians followed the terror attack. An Israeli woman was injured in a rock throwing incident near the Hawara checkpoint close to Nablus. She was taken to Beilison Hospital in Petah Tikva for treatment. A Palestinian woman and her three children were said to be lightly injured in another rock throwing attack by settlers in the Palestinian village of Burin, west of Beit Furik.