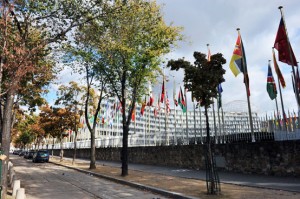 The executive board of the United Nations Educational, Scientific and Cultural Organization (UNESCO) adopted a resolution on Friday that ignores Jewish ties to the Har Habayis and Kosel in Yerushalayim.

With 33 votes in favor, six against, and 17 abstentions, the resolution solely refers to the Har Habayis areas by their Muslim names—Al-Aqsa mosque/Haram al-Sharif—with the exception of two references to the Kosel Plaza in parentheses, the Jerusalem Post reported. The resolution also referred to the Kosel plaza by its Muslim name, Al-Buraq Plaza.

Last October, UNESCO dropped language from a resolution led by six Arab states that called the Western Wall an “integral part” of the Al-Aqsa mosque compound on the Temple Mount. But that language was removed from the resolution in order to garner more support for the measure.

Israeli Prime Minister Bibi Netanyahu issued a response to a UNESCO resolution, slamming it as “absurd” and ignoring a “fundamental part of human history.”

“The decision made by the United Nations is absurd,” a statement from the Prime Minster’s Office reads.