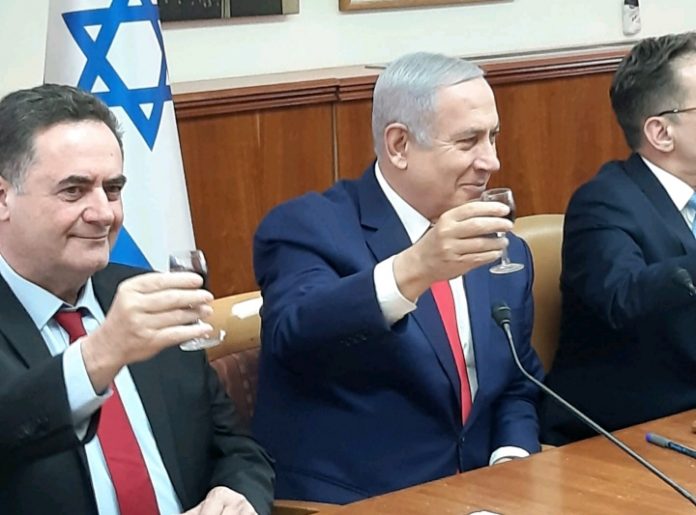 Address by Prime Minister Benjamin Netanyahu at the start of today’s Cabinet Meeting:

“To the the beginning of my words I would like to relate to the” Bereishit moon landing attempt.

Over the weekend the State of Israel made history. It was one of the seven countries that came to circle around the moon and one of the four countries that landed on the moon, but we landed in an unfavorable way.

This is a tremendous achievement for the SpaceIL consortium, Israel Aerospace Industries and the State of Israel, which supported this. We intend to launch “Genesis 2″, the State of Israel that participated in launching the first spacecraft will also participate in launching the second spacecraft and I hope this time successfully. In this case we will really be the fourth country to successfully land on the Moon.

This proves first of all our abilities, our ambitions and the fact that we are not impressed by failures. The difference between winners and losers is that we do not give up. We will try again and again until we succeed. I think we have a good chance of succeeding for the second time. From what I heard and the problems I saw there, people would look into the problem and be able to deal with it.

At the beginning of this meeting, I would like to congratulate the members of the Government for four years of great achievements and achievements. Many achievements. This is reflected in the public’s decision to renew the Mandate for us as a result of a tremendous act in all the areas that are represented around this table – in a very clear and successful action by the government ministers. We will continue to do so in the next government, and with God’s help we will succeed.

At the end of the week there was a very important development for the State of Israel and for the international community. The Hague court rejected the International Criminal Court’s demand to investigate US soldiers. This has put an end to anything that would reverse the original goal of establishing international law. It was founded mainly after the injustices of pogroms, genocide and other problems that arose over the years to deal with countries and regions without a real legal system.

Therefore, what we have here is correcting a wrong, and this is an act that has far-reaching implications for the conduct of the international system vis-a-vis the State of Israel. I congratulate the United States, President Trump and the Trump administration for their steadfast stand with the citizens of Israel and IDF soldiers. As in previous times, it has been proven that Israel has no better friend than the United States, and we very much appreciate this support in this area as well.

When I was ten I saw an exhibition not far from here. It was an exhibition on Independence Day. There was a big tent and under the tent they brought a cannon. I looked at the cannon, then saw an armored personnel carrier, then saw soldiers and saw a tank, and I remember it made a tremendous impression on me, suddenly we have an army, and I did not understand it until I saw it directly.

Today we will decide on the opening of our IDF exhibition in Jerusalem, and will present to the public the tremendous contribution of the IDF to the State of Israel and its security. We respect the IDF and there is no better place to do this than in our capital, Jerusalem, and I invite the citizens of Israel to come and take part in this exhibition, and to impress the children of Israel as I did a few years ago. ”