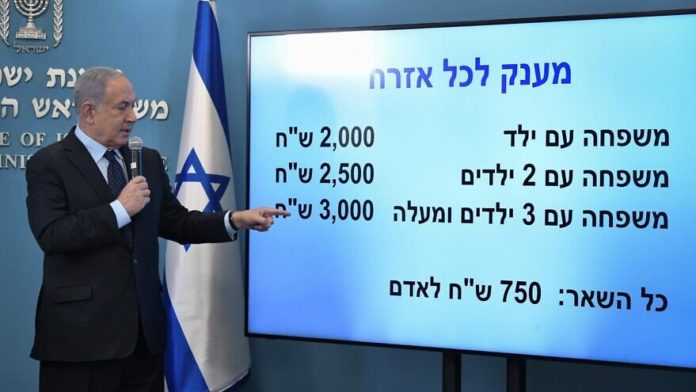 Prime Minister Benjamin Netanyahu got a lukewarm reception on Thursday from his main coalition partner and the head of the central bank to a plan to grant money to all Israelis to kickstart the economy during the coronavirus crisis.

Netanyahu announced the 6 billion shekel ($1.75 billion) package on Wednesday, amid public anger over his handling of a pandemic in which contagion has surged and promised state aid to businesses has been slow to arrive.

The payments of 750 shekels for individuals and up to 3,000 shekels to families, Netanyahu said, would boost consumer spending and employment. The plan still requires cabinet approval.

Bank of Israel Governor Amir Yaron and Foreign Minister Gabi Ashkenazi of the centrist Blue and White party that has partnered with Netanyahu’s Likud in the government, said the money should instead be targeted at the poorest citizens.

In an interview with Army Radio, Yaron said it was very important to help “but even more important to aid those in need. There are more effective ways to help increase demand,” he said, adding that more cash could be given to the unemployed.

Yaron had supported a previous 100 billion shekel ($29 billion) stimulus package and a second one announced last week, even though they are expected to drive this year’s budget deficit up to 13 percent of gross domestic product.

The economy is set to contract 6 percent in 2020. Unemployment soared to 27 percent after a partial lockdown in March but is now running at 21 percent as people have come back from furlough.

Ashkenazi said on Army Radio that while he was not opposed to grants for Israelis hit by economic hardship, Blue and White would try to amend Netanyahu’s plan so that the money would go “to those who are hurting and not to those who don’t need it.”

Netanyahu said doing so would be too time-consuming.

Israel, with a population of around nine million, has reported more than 44,000 coronavirus cases and 377 deaths.