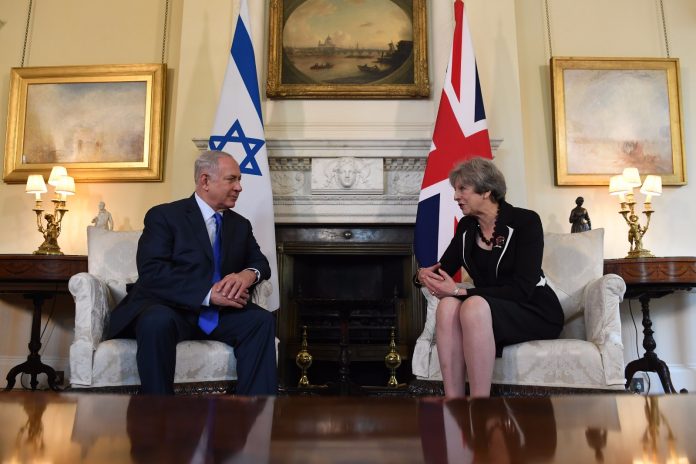 Israeli Prime Minister Benjamin Netanyahu arrived in London on Thursday to meet with British Prime Minister Theresa May and participate in a dinner marking the centennial anniversary of the Balfour Declaration, which is considered to be the first documented legitimization of the state of Israel.

“We’re going to mark a very important centenary — 100 years for…the Balfour Declaration, which recognized the right of the Jewish people for their national home in this land,” Netanyahu said before departing for the UK. “I very much appreciate this gesture by the prime minister of Britain and the government of Great Britain.”

Netanyahu dismissed Palestinian claims that “the Balfour Declaration was a tragedy,” and said the true tragedy is the Palestinians’ inability to accept the declaration a century later.

“I hope they change their mind, because if they do they can move forward finally to making peace between our two peoples,” he said.

The Balfour Declaration was written by UK Foreign Secretary Arthur James Balfour to the 2nd Baron Rothschild, Lionel Walter Rothschild, who was the leader of the British Jewish community at the time. It stated that the British government would “view with favor the establishment in Palestine of a national home for the Jewish people.”

The UK recently rejected a push by the Palestinians demanding that Britain apologize for the Balfour Declaration.