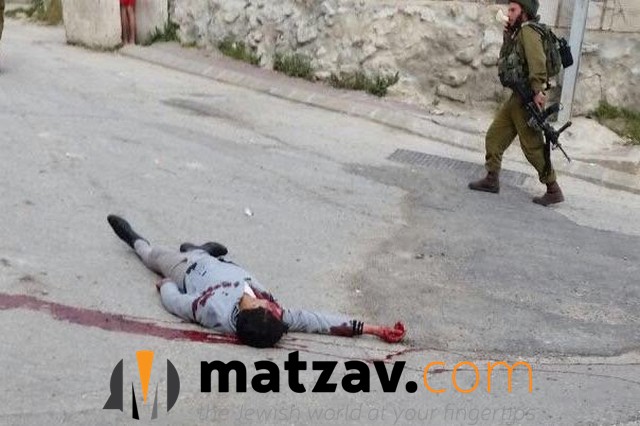 Israeli Prime Minister Bibi Netanyahu, along with other Israeli politicians and representatives of the Israel Defense Forces, have condemned the actions of an Israeli soldier who shot dead a Palestinian terrorist in Chevron after the terrorist was already lying wounded and incapacitated on the ground.

The Palestinian man was one of two terrorists who stabbed an Israeli soldier on Thursday, the day of Purim. They were initially shot and neutralized by IDF soldiers from the Kfir Brigade. In a video showing the aftermath of the incident, which was filmed by the left-wing NGO B’Tselem, an IDF soldier then shoots one of the wounded terrorists who was lying on the ground in the head. The B’Tselem volunteer who captured the video footage said the man was still alive when he was shot.

“What happened in Chevron doesn’t represent the values of the IDF,” Netanyahu said in a statement. “The IDF expects its soldiers to behave level-headedly and in accordance with the rules of engagement.”

Israeli Defense Minister Moshe Ya’alon said the soldier’s apparent actions were “in utter breach of IDF values and of our code of ethics in combat,” and that “even when the blood boils” in the face of ongoing Palestinian terror, “we must not allow such loss of reason and such loss of control.”

Israeli opposition leader Member of Knesset Isaac Herzog (Zionist Union) said the shooting had “dire markings,” and MK Ofer Shelah (Yesh Atid) said, “The murderous loathsomeness of the terrorists is no reason for the IDF to lose its morals.”