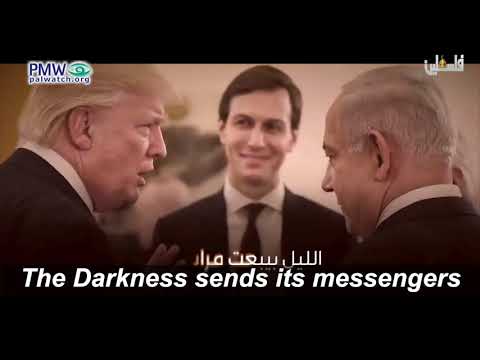 Israeli Prime Minister Benjamin Netanyahu is the “darkness” and U.S. President Donald Trump and his senior adviser Jared Kushner are his “messengers,” according to a music video broadcast by official Palestinian Authority TV last month. Palestinian Authority leader Mahmoud Abbas is the “light”—literally, “the Son of the Sun”—the counter-force that will defeat the darkness.

Visuals of Netanyahu followed by Trump accompany lyrics telling of “a monster with horns dragging a tail.” Abbas—the “Son of the Sun”—is instructed to “break its horn and cut off its tail.”

Later in the video, the monster “knocks on the door with his fangs,” while a photo of Trump is shown, followed by a dollar bill bearing his portrait.

The song was aired on official PA TV in the context of the Bahrain conference last month. The P.A. boycotted the conference, which focused on economic aspects of Trump’s as-yet undisclosed Mideast peace plan.

The song was performed by the Palestinian band Alashekeen, which has glorified and called for armed attacks against Israel in music videos. Abbas declared the band a “national institution” in 2010.