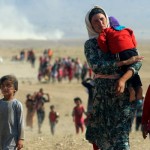 As the world stood by, it was Israel that first stepped in to assist the refugees from Syria, Israeli Prime Minister Bibi Netanyahu said yesterday.

“Israel is not indifferent to the human tragedy of the refugees from Syria and Africa,” Netanyahu told the cabinet. “We have already devotedly cared for approximately 1,000 wounded people from the fighting in Syria and we have helped them to rehabilitate their lives.

“We are speaking with African heads of state, and with the Italian Prime Minister recently and with other European leaders, about multilateral aid packages for the countries of origin in Africa – in agriculture, economics and security – in order to deal with the problem at its source.”