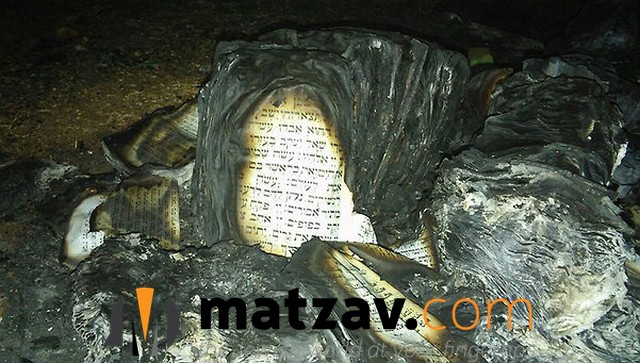 Israeli Prime Minister Bibi Netanyahu vowed on Motzoei Shabbos that Israel would track down and bring to justice the suspected Palestinian arsonists who set fire to Torah scrolls at a West Bank outpost the night before.

“Last night, a synagogue in Givat Sorek, in Gush Etzion, was set on fire by Palestinians. We will prosecute the perpetrators of this crime. I expect the international community to condemn the desecration of a synagogue, an act that is the result of incessant Palestinian incitement,” the prime minister said in a Facebook post that appeared in English and in Hebrew alongside an image of the burned Sifrei Torah.

The suspected attackers set fire to the scrolls at an outpost next to the Karmei Tzur settlement in the West Bank. There were no injuries in the incident, but the scrolls were badly damaged.

According to Karmei Tzur residents, the suspected arsonists piled up the Sifrei Torah and set them alight. Judea and Samaria police said that the footprints of the suspects were found leading to a Palestinian village near the town of Halhul.

The tent, which was not being used at the time, overlooks the site where the bodies of three Israeli teens, Eyal Yifrach, Gil-ad Shaar and Naftali Fraenkel, were found after they had been abducted and murdered by Hamas-affiliated Palestinian terrorists in June 2014.

“The assault on our people’s sanctities hurts all the more when it is done at the place that commemorates Eyal, Gil-ad and Naftali, who were murdered by a cruel hand… I am certain and confident that the security forces will bring the perpetrators to justice swiftly,” Rivlin said.

“In a place where books are burnt, there in the end people will also be burned,” she said, quoting the German Jewish poet Heinrich Heine. “Attacking Torah scrolls is an attack on the soul of the Jewish people. Those who wish to harm our bodies do not flinch from attacking our spirit. We will continue to choose life — and to strengthen the spirit of the Jewish people, which is stronger than ever,” she wrote.

Education Minister Naftali Bennett, head of the Jewish Home party, said the pictures of the burned Sifrei Torah “recall the darkest days of our history.”

He urged security forces to quickly catch “the terrorists who did this,” saying “a red line has been crossed… and we will not allow this to go unpunished.”

In a statement, the media office of the Etzion regional council noted the short distance from the tent to the Karmei Tzur settlement.

“The vandals piled up the books and set them on fire. There is a great deal of frustration in Karmei Tzur. This isn’t the first time that terrorists burn the place…. We must not forget that fewer than 100 meters separate the hill [where the arson took place] and the homes [of Karmei Tzur]. The attack in the former is a dangerous prelude for the future,” the statement read.