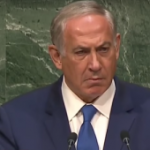 At his weekly cabinet meeting, Netanyahu pointed out that terrorist attacks perpetrated by Arabs are supported by the Palestinian Authority, while Israel condemns such acts committed by Jewish extremists.

Netanyahu said that unlike Israel, which “disavows, condemns and takes action” against terrorism, the Palestinian Authority “encourages and incites terrorism.” He added, “Arab terrorism attacks us relentlessly and we are fighting it without restrictions. This terrorism is much greater in magnitude; there is no comparison.”

“The government here, and our public, and all bodies and all leaders come out against the phenomena of Jewish terrorism. We condemn, they praise,” he said. “In the Palestinian Authority, public squares and streets are named after them. They pay them salaries.”

The Israeli prime minister’s comments come in the aftermath of criticism against Israel’s Shin Bet security service for methods used in the detention of Jewish suspected terrorists.

In addition, a video of Jewish extremists mocking the death of a Palestinian child made headlines last week. The footage, which was filmed at a Jerusalem wedding, featured a group of far-right activists dancing while holding various weapons. One person held a knife and a molotov cocktail, while another was seen stabbing a photograph of Ali Dawabsha, the 18-month old toddler who was killed in a suspected arson attack in the West Bank village of Duma.

Netanyahu called the video “disgraceful” during Sunday’s cabinet meeting and said the extremist group does not represent religious Zionism.