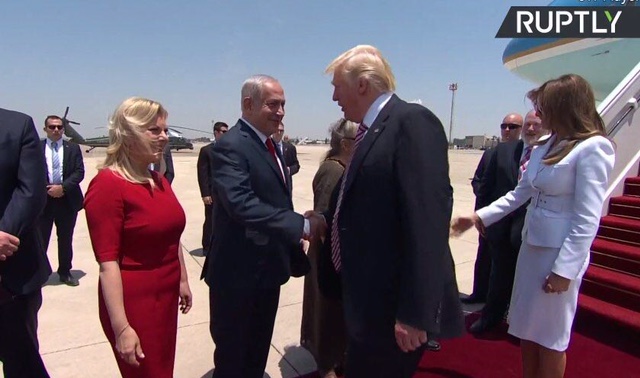 After their meeting in Jerusalem on Monday, Israeli Prime Minister Benjamin Netanyahu thanked US President Donald Trump for his “reassertion of American leadership in the Middle East.”

“I look forward to working closely with you to confront the dangers we face together in this violent and volatile Middle East,” Netanyahu said in remarks before the two leaders, joined by their wives, sat down for dinner. “I believe that together we can roll back Iran’s march of aggression and terror in this region and we can thwart Iran’s unbridled ambition to become a nuclear weapons state.”

Furthermore, Netanyahu praised Trump for his “deep commitment to Israel’s security, its well-being and its future.”

“I have no doubt that as we work together, you and I, the alliance between our countries will grow ever stronger,” he added.

For his part, Trump — who arrived in Israel earlier in the day and visited the Western Wall — said, “We have so many opportunities in front of us. But we must seize them together. We must take advantage of the situation and there are many, many things that can happen that would never have been able to happen before and we understand that very well.”

Regarding a potential Israeli-Palestinian peace agreement, Trump stated, “I have a feeling we’re going to get there eventually, I hope.”

Listen: The Daily “Bitachon 4 Life” Burst of Inspiration on Matzav.com: What is the First Approach to Any Situation?

Listen: The Daily Tefila4Life Shiur On Matzav.com: Why Do We Praise Hashem?

At Least 16 Dead As India Airliner Crashes On Landing