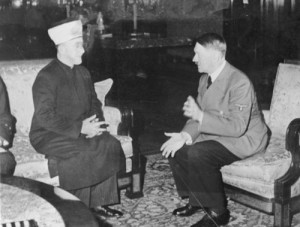 Israeli Prime Minister Bibi Netanyahu refuted the criticism voiced against him that he attempted to absolve Hitler from responsibility for the Holocaust, in the wake of comments he had made on incitement by the Nazi-sympathizing Grand Mufti of Jerusalem, Haj Amin al-Husseini, during World War II.

On Tuesday, Netanyahu said at the 37th World Zionist Congress that Arab attacks on Jews during the 1920s “were instigated by a call of the Mufti of Jerusalem Haj Amin al-Husseini, who was later sought for war crimes in the Nuremberg trials because he had a central role in fomenting the Final Solution. He flew to Berlin. Hitler didn’t want to exterminate the Jews at the time, he wanted to expel the Jews. And Haj Amin al-Husseini went to Hitler [in a 1941 meeting in Berlin] and said, ‘If you expel them, they’ll all come here.’ ‘So what should I do with them?’ [Hitler] asked. [Husseini] said, ‘Burn them.’ And he was sought in, during the Nuremberg trials for prosecution. He escaped it and later died of cancer.”

Critics of Netanyahu’s comments have since pointed out that the Final Solution was already underway when Hitler met with Husseini. Furthermore, a spokesperson for German Chancellor Angela Merkel, Steffen Seibert, said that “all Germans know the history of the murderous race mania of the Nazis that led to the break with civilization that was the Holocaust.”

“This is taught in German schools for good reason, it must never be forgotten. And I see no reason to change our view of history in any way. We know that responsibility for this crime against humanity is German and very much our own,” said Seibert, Reuters reported.

On Wednesday, Netanyahu clarified his earlier comments with a new statement that he “had no intention of absolving Hitler from his diabolical responsibility for the annihilation of European Jews. Hitler was responsible for the Final Solution—the extermination of 6 million Jews. He made the decision. At the same time, it is absurd to ignore the role played by the mufti, Haj Amin al-Husseini, a war criminal who encouraged Hitler, [Joachim von] Ribbentrop, [Heinrich] Himmler and others to destroy the Jews of Europe. There is much evidence of this, including the testimony of Eichmann’s deputy at the Nuremberg trials.”

Netanyahu further explained that the reason he brought up the issue was to illustrate the long history of Palestinian incitement against Jews, which existed before the establishment of the State of Israel.

“The Palestinian incitement to kill Jews, which began with [Haj Amin al-Husseini], continues today…For the murder to stop, the incitement must stop,” Netanyahu said.