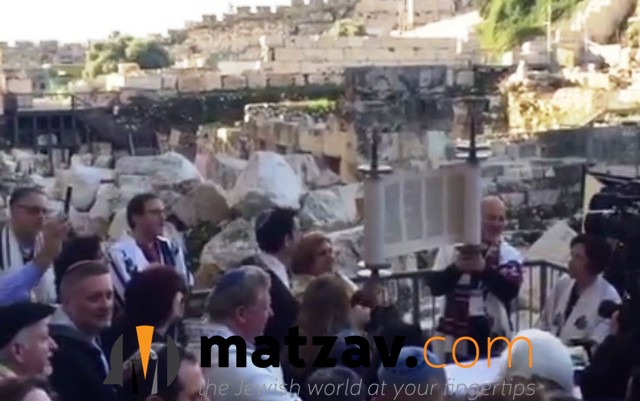 Israeli Prime Minister Bibi Netanyahu said during the General Assembly of the Jewish Federations of North America held in Washington, D.C. Tuesday that “quiet diplomacy between Jews” is what’s needed to resolve the Kosel issue.

Netanyahu appeared live via satellite at the conference attended by 3,000 people for a short interview that touched on a few hot topics. Regarding the issue of the Israeli government’s passage of legislation that authorizes egalitarian prayer at the Kosel, he said that “we are working with the parties, we stand ready to work a little more… This is one instance where I think we need quiet diplomacy between Jews and Jews. That’s a lot more likely to get the result we all seek.”

The Israeli leader also talked about achieving peace, saying he agreed with President Barack Obama that “imposing peace from the outside” won’t work. “I look forward also to working with President-elect Trump when he becomes president and his administration to further the twin interests of peace and security. These are interests of Israel and the United States but they’ll be achieved by direct negotiations between the parties without preconditions.”

Additionally, he predicted that within the next decade the “automatic majorities against Israel in the U.N. will collapse and Israel may actually find a fair hearing there,” and talked about his country’s largest assistance package to the Arab sector for education, infrastructure and transportation.

He opened his remarks commenting on the “powerful alliance” between Israel and the U.S. and that he finds “great encouragement in the fact that there is this continuity of bi-partisan friendship across administrations.” JNS.ORG