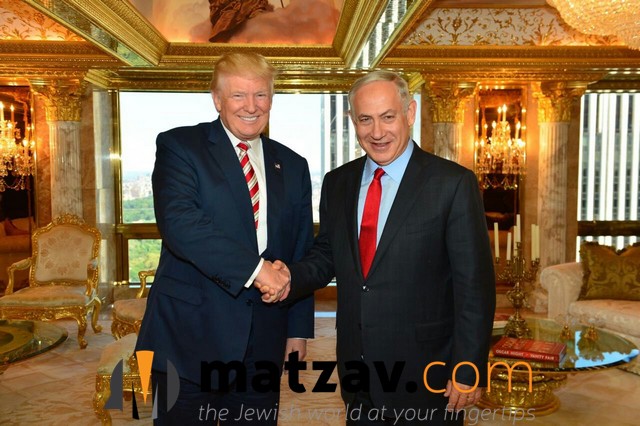 Speaking to a large gathering of US Jews on Tuesday, Israeli Prime Minister Bibi Netanyahu said he was looking forward to working with President-elect Donald Trump and his administration to advance the “twin interests of peace and security.”

“I, for one, find great encouragement in the fact that there is this continuity in bipartisan friendship across administrations,” Netanyahu said via video feed from Jerusalem to attendees at the closing plenary of the Jewish Federations of North America’s General Assembly in Washington, DC.

Asked indirectly about rumors of a potential Obama administration-led end-of-term Israeli-Palestinian peace push in the next two months, Netanyahu said:

Furthermore, Netanyahu noted, “there may be possibilities emerging in the Middle East as a result of the different appreciation that many in the region have for Israel’s role in fighting the twin forces of militant Islam — that led by Iran and that led by ISIS. And I think that may open the prospects for peace.”

The prime minister went on to speak about his upcoming trips to Kazakhstan, Azerbaijan, Singapore and Australia. He also revealed — for the first time publicly — that his travel itinerary includes a stop in the Pacific island nation of Fiji — whose prime minister, Frank Bainimarama, visited the Jewish state earlier this month.

“This is happening because of the dual appreciation of Israel’s role as a strong and powerful factor in fighting terrorism worldwide…[and] secondly, they all want technology…That is bringing all these countries to Israel as never before,” Netanyahu said.

Speaking optimistically about Israel’s future, Netanyahu emphasized, “Israel is poised in ways that very few countries are to seize the 21st century…Those who can innovate seize the future and Israel is the innovation nation.”

In a speech before Netanyahu spoke, Chemi Peres — son of the late Israeli President Shimon Peres who died in September at the age of 93, said, “I would like to wish President-Elect Trump the best of luck. I am sure he will maintain the unbreakable link between Israel and the US, at the core of which are the unwavering support of Israel’s security, and the forever extended hand for peace.”

“His friendship with my father, the honor bestowed upon Israel when he awarded President Peres the Presidential Medal of Freedom, and his support when my father passed away — show the close bond he shares with Israel and its people,” Peres said. “I would also like to thank Secretary [Hillary] Clinton for being a close friend to my father and staunch supporter of Israel.”