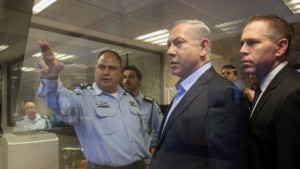 Amid a spate of attacks that has set the country on edge, Israeli Prime Minister Bibi Netanyahu warned Wednesday that Israel was in the midst of a wave of terror but said that the country had suffered through worse.

Netanyahu hailed Israeli resilience and praised police for their work to crack down on Palestinian unrest, during a visit to a Yerushalayim police station.

“We are still in the midst of a wave of terror,” the prime minister told officers on a day which saw five separate attacks on Israelis, including three stabbings.

“We have known worse times than this and we will also overcome this wave of terrorism with determination, responsibility and unity,” he added.

“I want to commend the courage and composure displayed by Israel’s citizens in recent days, as well as today in Jerusalem and Kiryat Gat.”

“We will take firm action against terrorists, lawbreakers and inciters. We have bolstered our troops and are using all means necessary to fight this terrorism,” the prime minister vowed. (Times of Israel, JKN)