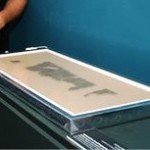 The scroll, which was found in the Qumran Caves in the Judaean Desert, was recently put on display for four days at Jerusalem’s Bible Lands Museum. The Israel Antiquities Authority (IAA) brought the scroll to Netanyahu’s office on Sunday for Tisha B’Av, after which point it was returned to special storage conditions at an IAA laboratory.

“This is an important and moving find,” Netanyahu said. “It is very significant that that this scroll has been brought to the Prime Minister’s Office in Jerusalem, our united capital, on the Fast of the Ninth of Av.”

IAA Curator in Charge of the Dead Sea Scrolls Pnina Shor said the scroll, dated to between 30 BCE and 70 CE, is the earliest-known example of Megillas Eichah.