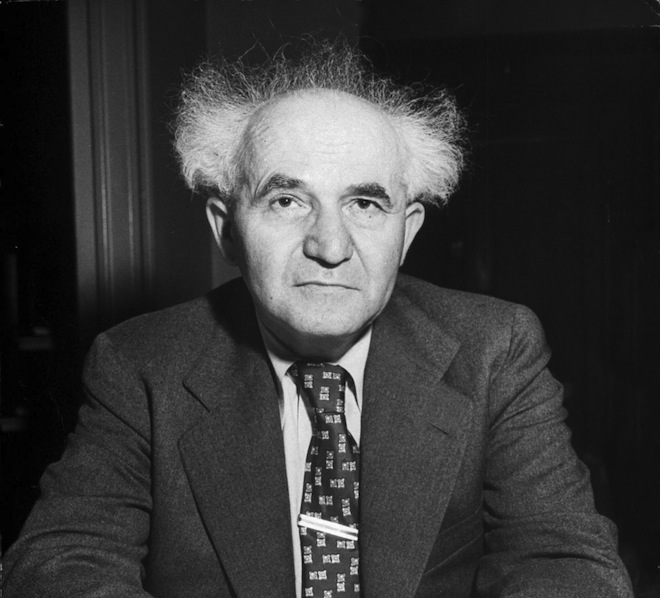 Speaking to Haaretz, the author said Ben Gurion was a man of contradictions. He was not corrupt, he avoided cigars and champagne, traveled third class and shared a ship cabin with others, yet apparently, he reneged on paying loans for a house he bought in Tel Aviv and did not always pay for the thousands of books he bought.

Segev found that Ben Gurion’s diary entries indicated frequent depressions. He would write things like: “Even in my moments of happiness I cannot liberate myself from the suffering of the deep sorrow that has penetrated my entire being. I cannot bear the distress of my mind.”

The new biography lists bizarre incidents in his life. They include a decision to drop everything and move to Kibbutz Sde Boker in the Negev, a proposal to convert the Arabs to Judaism, a suggestion to declare war on Britain and Germany, a trip to Burma to study Buddhism, avid interest in the Zohar, discussion of the possibility of gaining French Guiana north of Brazil, consultation with a fortune teller, a claim that he saw a flying saucer and fondness for standing on his head.

Segev notes in his book that in 1919, when Ben Gurion established the Unity of Labor Party, he already knew that peace with the Arabs was impossible.

“Everyone sees a difficulty concerning the question of the relations between Jews and Arabs. But not everyone sees that there is no solution to that question. No solution. There is an abyss, and nothing can fill that abyss,” Ben Gurion said then. “We want the Land of Israel to be ours as a nation. The Arabs want the land to be theirs as a nation. I don’t know what Arab will agree to the Land of Israel being for the Jews.”

This influenced Ben Gurion’s encouragement of Hebrew labor and his statement at the end of the 1930s that, “I am in favor of a forced transfer. I do not see anything immoral about it.”

Hearing of the Holocaust for the first time in July 1942 from Christian Palestinian Francis Kettaneh, who heard about it during talks with members of the Polish government in exile in London, Ben Gurion said, “I was appalled.”

But later, as chairman of the Jewish Agency Executive, he said, “The disaster of European Jewry is not directly our affair.”

The book also reveals that Ben Gurion attempted to extend the British Mandate for another five or ten years in 1947 in return for increased Jewish immigration, and in later years he expressed readiness to forgo Israel’s nuclear program in return for a military alliance with the U.S.