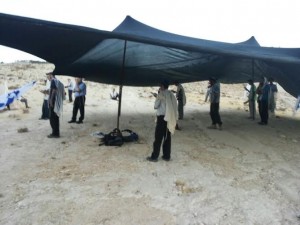 During the early hours of the morning a group of some thirty Israelis established a new community in the disputed E1 area near Ma’aleh Adumim. The members of the group announced that their action is in response to the murder of the three boys.
Five months ago 15,000 protesters called on the government to build in the area. The area is in the municipality of Ma’aleh Adumim, and plans to build there have met international opposition because they hinder plans to establish a Palestinian capital there.
Yuval Aharoni, one of the group’s leaders, told Tazpit News Agency that: “During these days in which terror tries to impair our lives and harm our national might, this is the time for a proper Zionist response and to announce with confidence on the continuation of the construction and the development of new communities.” He further shared that this move is backed by the Ma’aleh Adumim municipality and they were visited by the mayor and his deputies.

MK Motti Yogev (Bayit Yehudi) stated that building the Land of Israel is always the right thing to do, and as a response to terrorism this is the proper Zionist reaction. “New communities on Judea and Samaria strengthen the security. Banish the darkness by shining the light brighter,” he said. MK Miri Regev (Likud) called on the government to implement Israeli sovereignty and law on Judea and Samaria. “Those who harm us wish to chase ud away, “said MK Ze’ev Elkin (Likud), “Therefore, the proper response is to build. I call on the government to support these actions.”