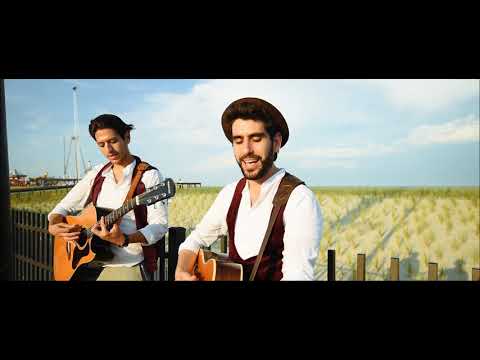 When we arise in the morning, the first breaths we take are with the words “מודה אני – I Give Thanks to You Hashem ”, on our lips.

The first words we say before we pray Shachris are, “ואהבת לרעך כמוך” Love Your Friend as Yourself.

This song, harmonized by brothers Matt & Tzvi Levin, bring out the light energy of love and appreciation. They believe that in order to truly experience the beauty of the world and the journeys we take, we must be able to put HaShem first and say thanks. Our appreciation to Him must be equivalent to our ability love our friend as much as we love ourselves. Perhaps, through dancing with this song we will learn to love ourselves on a greater level and then able to give to the world all the beauty we hold within.

This song was taught to us by one of our long time Rebbes, Reb Shivi Keller. It was a wintery night in Brooklyn with about 250 people huddled around a cluster of candles to warm their hearts. Reb Shivi shared this new composition. That dark room was ablaze. We sang that song on and on… And honestly my friend, we have never stop singing it since. We have sang Modeh Ani at hundreds of live events -and in close to 20 countries. We now decided to formally record and release it to bring its message into our day to day life.
___________________________________

Side story: 20 minutes after this video was shot, this 1969 VW Bus in mint condition blew up in 20 foot flames.
“It has fulfilled its mission.”
–The owner Brother Ovaid

Pumpidisa provides music for Weddings, Concerts, Sheva Brachos, Bar/Bat Mitzvas, Fundraisers, Kumzitzes and any event that needs a sprinkle of energy and soul. Our broad list of satisfied and repeat clients from all backgrounds and regions is a testament to our unique ability to not only fill the air with beautiful music, but also a transcendent joyfulness that lifts the hearts and spirits of those present. We’re not merely here to perform, dutifully playing notes off a page; we’re here to share an experience.
+1347.639.3774