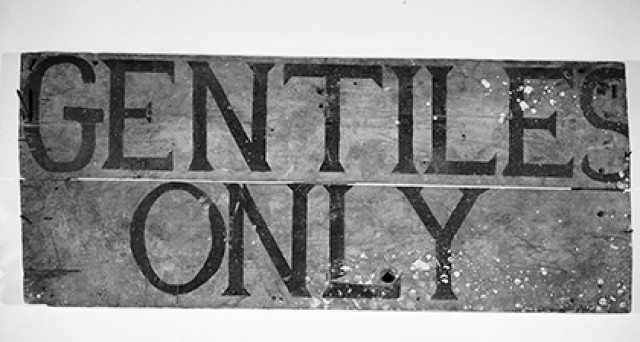 A new survey showed a rise in the number of Americans who said small businesses should have the right to refuse service to Jews if doing so would violate the owners’ religious beliefs.

Conducted by the Public Religion Research Institute, which has partnered with the Brookings Institution and Georgetown University, the survey revealed that 19 percent of Americans felt discrimination against Jews on religious grounds was acceptable.

This marked a seven-percent rise since 2014, when only 12 percent agreed.

According to the data, 24 percent of Republicans, 17 percent of Democrats, and 16 percent of independents said such discrimination should be permitted.

In 2014, only 16 percent of Republicans and nine percent of Democrats did so.

There is a gender gap on the subject, with 22 percent of men and 16 percent of women saying discrimination was permissible.

Age did not prove to be a determining factor, and was relatively similar across all groups. However, support for discrimination was up in all age groups.

Since 2014, numbers have precipitously risen among some religious groups. Among white evangelical Protestants, it has doubled, rising from 12 percent to 24 percent. This was also true of white Mainline Protestants (26 percent from 11 percent) and Catholics (20 percent from 10 percent).

The only group in which the numbers remained stable was the religiously unaffiliated, at 11 percent in both 2014 and 2019.

Among non-white Protestants, the numbers rose only slightly, up to 19 percent from 14 percent in 2014.

The survey was conducted by telephone interviews with 1,100 adults over the age of 18. The interviews were conducted in both English and Spanish, and randomly sampled both women and men.

It had a margin of error of plus or minus 3.5 percentage points.