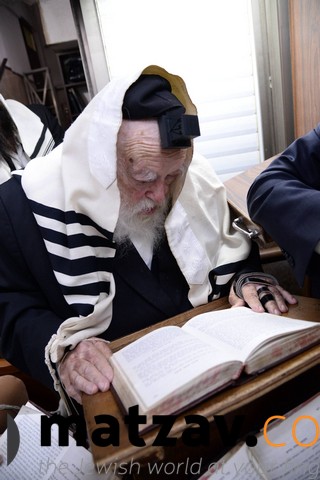 Tens of thousands passed the home of Rav Chaim Kanievsky at 23 Rechov Rashbam in Bnei Brak to receive his brachah for a shanah tovah. Rav Chaim sat in the Kupat Ha’ihr booth at the bottom of his house greeted the Jews who arrived.

Rav Chaim served as the makrei on both days of Rosh Hashanah during tekias shofar at the Lederman Shul next to his home. The baal tokeia was Rav Avrohom Yaakov Cohen.

This year, there were two innovations. Firstly, this year, a new women’s section was opened on the ground floor of the Lederman shul due to overcrowding.

In addition, for the first time, a special aquarium with fish was set up in Rav Chaim’s home for him to recite Tashlich. In previous years, it had been set up at the home of his son, Rav Avrohom Yeshayahu Kanievsky, to whose abode on Rechov Nechemiah Rav Chaim would trek.