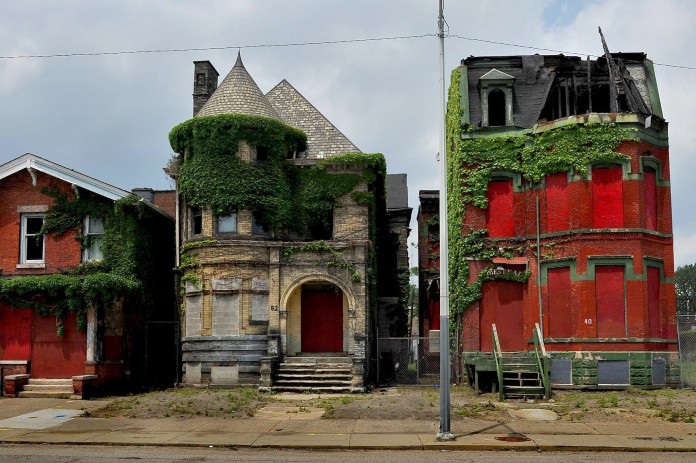 When Detroit was looking for ways to tackle its housing crisis, city officials first had to figure out how big the problem was. No one knew how many abandoned and blighted properties existed across the city.

The success of that program caught the attention of civic leaders in other parts of the country. Other communities saw how the data helped Detroit target its sparse resources for greatest efficiency.

“The mapping technology in Detroit has been significant and eye-opening in terms of the need that cities have for real-time data and forward-looking data,” said Janis Bowlder, head of community development for global philanthropy at JPMorgan Chase. “The mapping work that Loveland Technologies does is really a core part of how we think community development needs to happen in distressed communities.”

Cleveland, Cincinnati and Columbus don’t face the problems that Detroit does. But each of the cities has challenges. Western Reserve Land Conservancy, a nonprofit organization in Northeast Ohio that works to conserve natural areas and revitalize urban centers, launched Thriving Communities in 2011. Through that program, it set up 34 land banks, essentially organizations to repurpose property. They allow counties to acquire distressed properties, clear their titles and bring them back onto the market.

“We knew early on that we had a lot of challenges and one of them was we just didn’t have good data,” said Jim Rokakis, Thriving Communities Institute director. “We had been doing some survey work and mapping in the state but it was not nearly as good as the product they had.”

When Loveland first got involved in mapping Detroit it quickly learned it wasn’t just the city and county governments that were interested in the data; so, too, were the neighborhood and nonprofit organizations and real estate investors. Although the information had mostly been available, anyone seeking access to it would have to spend hours, if not days, searching dusty file cabinets.

“All of this is public-record information, but through time it’s typically been siloed either in filing cabinets or in databases that don’t talk to each other and live in different departments,” Paffendorf said.

By creating a one-stop shop for parcel information, civic leaders have property data at their fingertips that they can use to make smart decisions on development. Rokakis points to how the data was used in Lorain, Ohio, a city of 64,000 on Lake Erie. The mayor of Lorain estimated that there were 1,000 distressed properties in the city. But once the mapping was done, it turns out there were only 300 beyond repair.

“It helped them to recalibrate their directives in terms of where they were going to spend their money,” Rokakis said.

Neighborhood groups also tapped into the data, using it to make their case for parks, affordable housing and other community needs, thus creating a more level field where everyone has access to the data, not just government officials.

What is unusual about Loveland’s approach to data is that it created its tools for a city while incorporating resident participation and interaction. In Detroit, residents used their smartphones to take pictures of abandoned and blighted properties, fill out information about the building’s condition, and send that information into the dashboard. Other cities across the country are using the tool to do similar surveying.

“If ever there was a field ripe for some technology disruption, this is one,” Bowlder said. “This is not the place where you see this kind of innovation, and it’s needed. It’s been a game-changer in Detroit.”

Paffendorf would like to radically change how property data is made available, not just in the Midwest but also across the country.

He can be a bit evangelical about mapping and it benefits.

“In a time of change in the U.S., where many cities have (sometimes far) outlived their original purposes, where infrastructure is often crumbling and tax bases have altered to the point that governments can’t provide adequate services, seeing the grid becomes very urgent,” he wrote in an email.

Loveland has mapped 100 million parcels in the United States and is on its way to digitizing information on every property in the country, one parcel at a time.