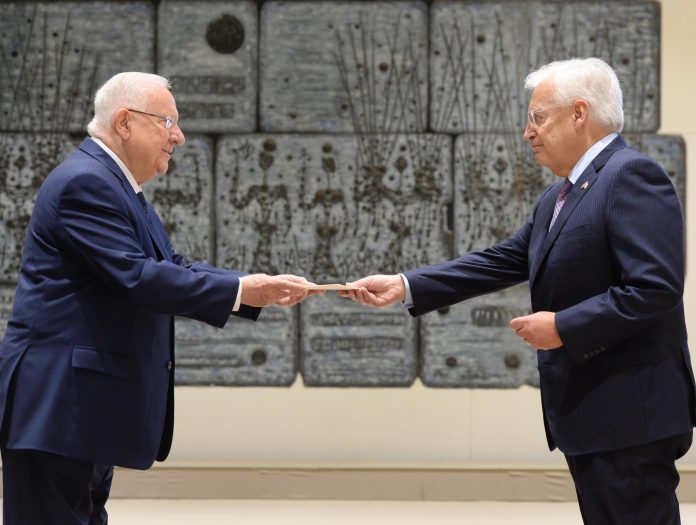 After presenting his diplomatic credentials to Israeli President Reuven Rivlin Tuesday in Jerusalem, new U.S. Ambassador to Israel David Friedman expressed his gratitude to President Donald Trump for an “unequivocal and unambiguous mandate to support the state of Israel in every way, and in all ways.”

Rivlin welcomed Friedman and called for “the whole world to recognize Jerusalem as the official capital of the state of Israel,” ahead of next week’s celebrations marking 50 years since the reunification of Jerusalem.

“As a seventh-generation Jerusalemite, you continue the connection to Jerusalem that began with King David some 3,000 years ago,” Friedman told Rivlin.

He added, “Serving the U.S. as its ambassador to the state of Israel is the greatest honor of my life, and I pledge to you to do all that I can to strengthen and enhance the relations between our two great nations—that you accurately described as unbreakable and, I would add, without limits.”

Following his meeting with Rivlin, Friedman met with Israeli Prime Minister Benjamin Netanyahu, who expressed his deep appreciation for Friedman’s visit to the Western Wall immediately upon the envoy’s arrival in Israel Monday. The ambassador replied, “There was no other place to go.”