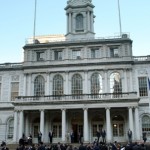 New York City – Lawmakers have agreed to create New York City identification cards residents could get regardless of their immigration statuses. The measure would add the nation’s biggest city to a growing roster of cities that have them.

The cards would be available to all city residents, but they’re aimed largely at helping the estimated 500,000 immigrants living illegally in the city. With the cards, they’d have government ID for opening bankaccounts, signing leases or other tasks.

Critics say the cards would permit benefits to people who shouldn’t be in the country.

The ID will include the cardholder’s photo, name, date of birth, address, expiration date. Applicants will be able to elect to include his or her self-designated gender, City Council Speaker Melissa Mark-Viverito said.