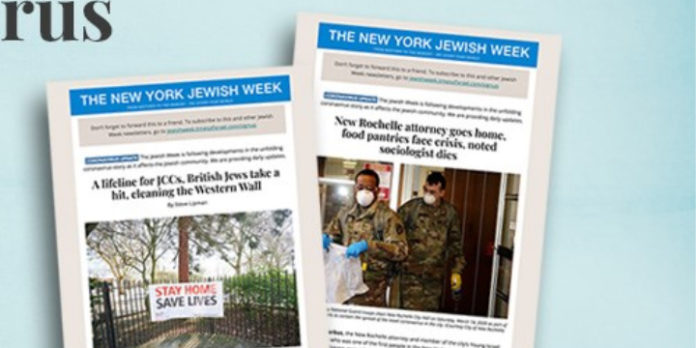 Venerable New York City Jewish newspaper The Jewish Week has decided to suspend its print version and laid off several employees due to the economic blow it has suffered as a result of the coronavirus pandemic.

In a message posted online, Kai Falkenberg — president of the Board of Directors of the Jewish Week Media Group — and Andrew Silow-Carroll — the paper’s editor-in-chief — stated, “Recognizing both what we’ve learned from the coronavirus crisis and how it has hurt our bottom line and that of our advertisers, The Jewish Week has decided to move faster in the direction of a digital-first enterprise.”

The paper will halt its print edition starting in August and “concentrate on bringing you an all-digital model that will satisfy our longtime audience, find a new generation of readers and enable us to more precisely target our journalism and advertising to the wide geographic expanse of the New York Jewish community.”

Silow-Carroll told The Algemeiner, “It’s been a tough year and COVID made it tougher. These are the institutional struggles of every major newspaper, compounded by the pandemic.”

He added, “We’ve had to lay off people from each of our departments since the beginning of the COVID crisis.”

The Algemeiner has independently confirmed that among those laid off were staff writer Steve Lipman and associate editor Jonathan Mark.

Silow-Carroll expressed hope that the publication would thrive in the all-digital format, saying, “We want to do it right and we want to come out of this with something better.”

“A lot of people are invested in the success of The Jewish Week, we’re not going to let it die,” he stated.

Thane Rosenbaum — head of the Forum on Life, Culture, & Society and frequent commentator on Jewish affairs — told The Algemeiner, “So much of New York Jewish life has been disappearing these past several years — from familiar faces to iconic stores — the loss of The Jewish Week would have been a big blow to the continuity of New York cultural life.”

“The paper has dependably covered the Jewish world from the bleachers of New York City, home to the largest concentration of Jews outside of Israel,” he continued. “Hopefully this all-digital format will provide the paper with a renewed long life, and that it’s longtime readers will be able to adjust to not having newsprint remain on their fingers.”

Journalist Michele Chabin, who worked for The Jewish Week for 20 years, commented on Twitter, “I hope not having to spend money on paper publishing will help the paper survive. I love the Jewish Week.”

The economic fallout from the coronavirus pandemic has had an intense impact on Jewish journalism. The UK’s Jewish Chronicle nearly folded earlier this year before a consortium and donors stepped in to invest in the paper’s survival.

In April, the Canadian Jewish News was forced to close down, with President Elizabeth Wolfe saying, “Unfortunately, we too have become a victim of COVID-19.”