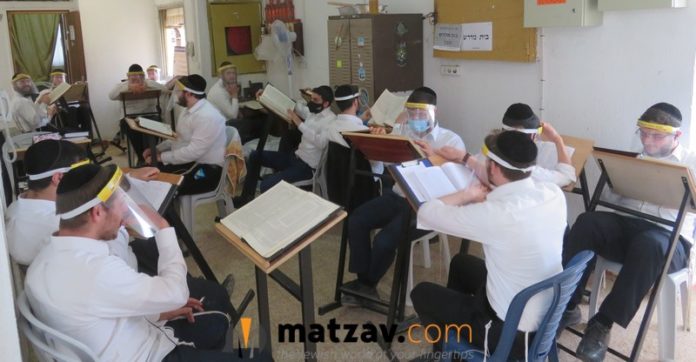 Judge Gary Sharpe has released a preliminary injunction overturning limitations in on religious gatherings in New York State in light of Covid-19.

The injunction released by the federal judge this morning states that the loss of plaintiffs’ free exercise rights is alone adequate to demonstrate irreparable injury.

The injunction says that gathering limitations may not be applied to any indoor religious gatherings greater than those implemented for “Phase 2 industries.”

In addition, no limitations at all may be made on religious outdoor gatherings, so long as those attending adhere to Covid-19 social distancing regulations.

Agudas Yisroel of America sent Matzav.com the following statement in response to the above development:

In a powerful legal vindication of a rallying cry Agudath Israel has made for over a month now, a federal court today substantially blocked New York Governor Cuomo and Mayor de Blasio from enforcing both indoor and outdoor limitations on prayer.
Specifically, the judge ordered that the current limitations on houses of worship, which in Phase 2 areas limits indoor attendance to 25% of capacity, be changed to 50% of capacity, equal to the limits on allowed businesses. The judge also barred all restrictions on outdoor gatherings. In both cases proper social distancing must still be followed.
The plaintiffs, two Catholic priests and three Orthodox Jews, claimed that the state’s executive orders were a violation of the Free Exercise Clause of the United States Constitution, among other claims, because the restrictions treated houses of worship differently than non-religious businesses. Moreover, the state and the city stopped religious gatherings while both the Governor and the Mayor encouraged, and the Mayor even participated in, outdoor protest demonstrations. State law also explicitly allowed outdoor graduation ceremonies.
The court felt that the executive orders were riddled with contradictions and placed constitutionally protected religious practice on a lesser plane than other practices with similar risk factors. Thus, as the court put it, “it is not the judiciary’s role to second guess the likes of Governor Cuomo or Mayor de Blasio when it comes to decisions they make in such troubling times, that is, until those decisions result in the curtailment of fundamental rights without compelling justification.”
This is a case that is likely to reverberate around the country as a check on executive authority that unjustifiably imperils religious practice.
As Agudath Israel put in its June 12 statement, “Governmental power has also been used as a sword against religion, instead of the shield the Founding Fathers intended it to be.”
With this victory in hand, Agudath Israel intends to press forward to protect religious rights such as religious education and religious summer camps. While Agudath Israel reminds its constituents to continue to prioritize safety, we must also zealously and unapologetically safeguard our way of life.