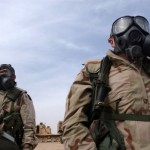 Chemical weapons were found by U.S. forces in Iraq, but the Pentagon kept the findings a secret, the New York Times reported Tuesday evening.

According to the Times, from 2004 to 2011 American troops repeatedly encountered chemical munitions in the Middle Eastern country. In at least six cases, coalition forces were even wounded by the weapons from the Saddam Hussein era, the Times reported.

The American government, however, chose to not disclose the information to the public and even kept Congress only partly informed, according to the Times.

“‘Nothing of significance’ is what I was ordered to say,” said Jarrod Lampier, a now-retired Army major who was present when forces found 2,400 nerve agent rockets in 2006 – the largest chemical weapons discovery of the war.

Another soldier, Jarrod L. Taylor, who witnessed the destruction of mustard shells, joked of “wounds that never happened” from “that stuff that didn’t exist,” the Times reported.

According to the Times, the finding of the chemical weapons still didn’t support President George W. Bush’s rationale for war because he contended Hussein was concealing an active chemical weapons program. Instead, U.S. forces discovered munitions that had been manufactured before 1991, possibly leading the government to not disclose the findings.

“They needed something to say that after Sept. 11 Saddam used chemical rounds,” Lampier said. “And all of this was from the pre-1991 era.”

Others told the Times that the U.S. may have hidden the findings because five of the six incidents in which coalition forces were wounded by chemical weapons involved munitions designed by the U.S.

Rear Admiral John Kirby declined to comment to the Times on their report, but said that a review had been launched to ensure military members were provided proper medical care.