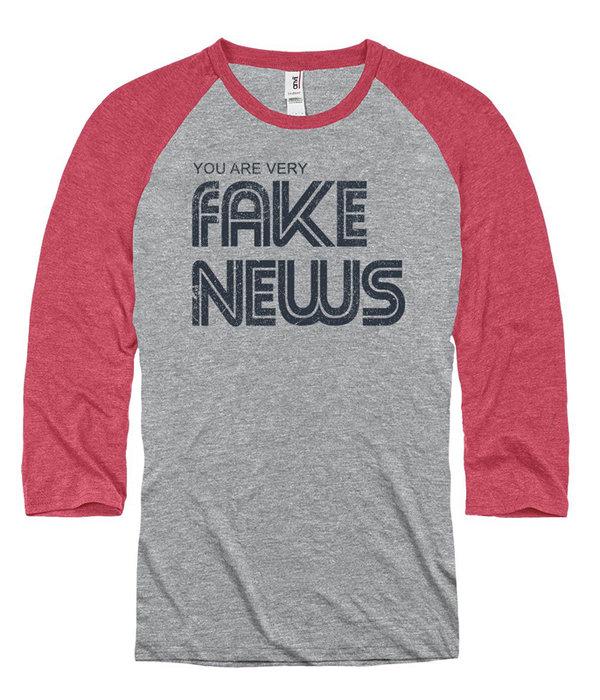 At the end of a week in which getting the White House to clarify whether it considers the news media “the enemy of the people” was a major story, Poynter made a revelation after visiting the Newseum’s website. The Washington attraction “dedicated to the importance of a free press and the first amendment” was selling “You are very fake news” T-shirts.

Before abruptly reversing course on Saturday, the museum sold the T-shirts alongside Make America Great Again hats and other items that could appeal to supporters of President Donald Trump, who popularized the term “fake news” and frequently battles with news outlets and reporters he says are unfair to him. During a rally in Pennsylvania on Thursday, he used the term, and it prompted chants of “CNN sucks” from the crowd. And recently Trump’s rhetoric has raised concerns that the hostility he has cultivated among his supporters could lead to violence.

It is against this tense backdrop that reporters reacted to the disclosure of the shirts for sale at the Newseum. Most were not amused.

Steve Reilly tweeted “A memorial at the @Newseumpays tribute to 2,323 journalists who died reporting the news, many of them at the hands of foreign regimes hostile the press.”

Leigh Giangreco tweeted “Your ‘fake news’ t-shirts aren’t funny, @NewseumThey make a mockery of the reporters, whose names you have inscribed on your walls, who died for their vocation.”

Michael Barbaro tweeted “This is a very bad idea @Newseum- you exist to honor, examine and protect the news media, not embrace the bywords by which others seek to undermine it.”

Sonya Gavankar, director of public relations for the Newseum, previously defended the merchandise to Poynter, a journalism teaching organization, saying that the items were part of the museum’s dedication to a wide range of viewpoints.

“We recognize why you’re asking the question,” she said. “As a nonpartisan organization, people with differing viewpoints feel comfortable visiting the Newseum, and one of our greatest strengths is that we’re champions not only of a free press but also of free speech.”

Justin Fenton tweeted “Sigh. It’s not about ‘free speech.’ People can say ‘fake news,’ and the @Newseumcan sell the shirt if it wants to. The fact that it’s antithetical to the Newseum’s mission is the issue. The baseball Hall of Fame doesn’t sell ‘baseball sucks’ shirts”

Brian Stelter tweeted “The Newseum says this is about championing ‘free speech.’ The more cynical read: The museum is deep in debt, strapped for cash, and tourists like these trinkets”

Or, as The Washingtonian’s Andrew Beaujon and Brittany Shepherd put it:

“‘Fake news’ is not a political argument that nicely balances, say, a ‘girl power’ bracelet in the shop’s feminism section. It’s a cynical political strategy that reflects years of work performed by very well paid people whose goal was to paint the news media as a political faction – as well as a rallying cry for people who view newsgathering errors not as the inevitable result of human endeavor but as confirmation of malice. Calling someone ‘fake news’ is a bad faith argument, not an invitation to discourse. And it has no business being in a museum as anything other than an exhibit.”

By Saturday, the museum had reversed its stance, announcing in a statement online that is has “removed the ‘You Are Very Fake News’ T-shirts from the gift shop and online.”

“We made a mistake and we apologize,” the statement said. “A free press is an essential part of our democracy and journalists are not the enemy of the people.”

The Newseum has been beset by financial trouble. It is a museum that charges $24.95 for general admission among a sea of free, taxpayer-supported Smithsonian museums. It is not odd for a museum to sell souvenirs in a gift shop, nor is it uncommon to see politically themed outfits for sale or worn in Washington.

The Post’s Michael Miller wrote in 2017 about how the city’s museums, including the Newseum, dealt with a surge in demand for Trump merchandise. Miller wrote then:

“What to sell has always been a tricky question for museums and monuments, where tacky items can undercut serious exhibits. With a president as polarizing and unpopular in the polls as Trump, it’s a conundrum that occasionally pits profit against principles.”