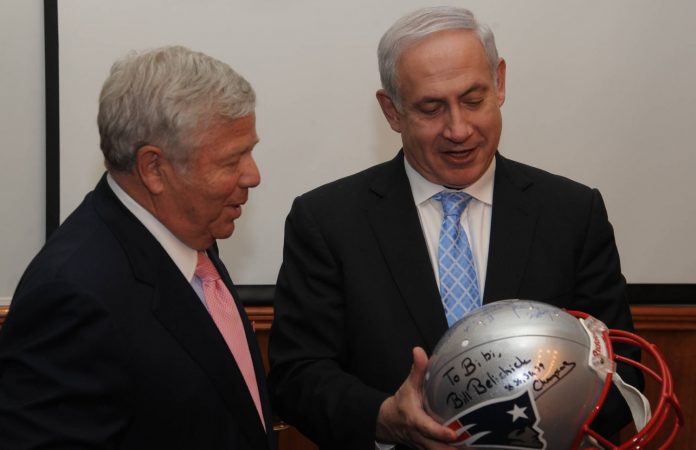 The new Kraft Family Sports Campus in Yerushalayim was inaugurated this week and made possible by a $6 million donation earlier this year by New England Patriots owner and five-time National Football League (NFL) champion Robert Kraft.

This will be Israel’s first regulation-sized American football field – which doubles as a soccer field – and will serve the country’s growing interest in the sport. Currently, there are 1,350 active football players in Israel, with dozens of teams across the country.

Some of the facilities at the new sports campus, along with the football field, include locker rooms and administrative offices.

“The Kraft Family Sports Campus is a central part of my vision for Jerusalem as an international capital of sport and athleticism,” said Yerushalayim Mayor Nir Barkat.

As part of the campus opening, NFL Hall of Famers traveled with Kraft to Israel to promote football in the Jewish state. Among the players are Joe Greene, Joe Montana, Jim Brown, Mike Singletary, Eric Dickerson and Roger Staubach.

During their stay, the group visited Tel Aviv, Jerusalem and the Dead Sea, as well as Christian sites near the Sea of Galilee — with several of the former players undergoing a baptism in the Jordan River. The NFL players also met with Israeli Prime Minister Benjamin Netanyahu.

The Kraft Campus was built in partnership with the Jerusalem Foundation, Moriah – Jerusalem Development Corporation and Israel’s Sports Betting Authority, as well as with the help of Israel Football Association President Steve Leibowitz.