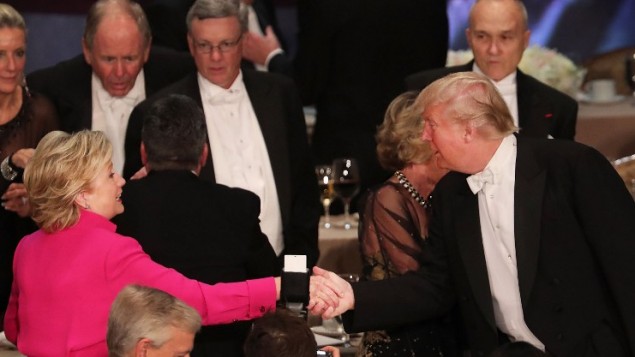 It was bound to be awkward from the beginning.

On a night in which Donald Trump and Hillary Clinton would meet for perhaps the final time, the staging called for speeches by the two presidential candidates.

The choreography at the Alfred E. Smith charity dinner benefitting the Catholic Church’s charities – an annual New York tradition for the city’s well-heeled and a quadrennial circus when the presidential candidates come to town – was perfectly set.

Melania Trump entered first and took her seat. Clinton entered next, moving deftly behind her to take a chair a few feet away, with nothing more than a polite greeting.

As Trump took the stage in white tie, he flashed a thumbs up and a wave, shaking hands with those on stage but seeming to make no acknowledgement of Clinton’s existence.

As the dinner’s chairman rattled off one joke after another – nearly all of which poked fun at Trump – the Republican nominee mostly smirked, while Clinton often threw back her head and laughed.

Trump’s turn came first. He sauntered to the podium and planted his finger on his paper.

“You always start out with a self … deprecating joke,” Trump said. The crowd chuckled. “Some people think this will be tough for me, but the truth is I’m actually a modest person. Very modest. It’s true.”

The crowd shuffled anxiously, but Trump kept on.

Normally, the fundraising dinner – which this year had raised more than $6 million – is a night in which politics is not so much put aside as deployed in service of a greater good, namely good-natured humor and charity. And Trump seemed off to a good start.

“Hillary is so corrupt she got kicked off the Watergate commission,” Trump declared.

“Booooo!” the agitated crowd called back. Behind him, the face of former ambassador Elizabeth Frawley Bagley was tense and set.

“All of the jokes were given to her in advance of the dinner by Donna Brazile,” Trump said, referring to the acting Democratic National Committee chairwoman.

“Here she is in public pretending not to hate Catholics!”

Some boos and jeers.

Clinton was no longer laughing, let alone smiling, and Cardinal Timothy Dolan, the Archbishop of New York and the night’s mediator between the two candidates, leaned over, engaging her in conversation as Trump kept going.

Trump had walked on the wire and maintained his balance. He nailed the tone and ignored a frosty room of smug media types who are liberal and left-minded.

He took his seat.

“As Ronald Reagan would say, there you go again!” deadpanned Smith before he introduced Clinton.

Just hours before Trump dismissed Clinton as a “nasty woman.”

In past years, the policy disputes made decent fodder for jokes and it wasn’t a stretch for the candidates to put those differences aside. Politicians have used this as an opportunity to not only prove that they have a sense of humor but that they can also make fun of themselves, turning gaffes into punchlines. There are often political jabs thrown, but softened with sarcasm.

In 2008, John McCain joked about “Joe the Plumber” and his own inability to remember how many houses he owned, saying: “Joe the Plumber recently signed a very lucrative contract with a wealthy couple to handle all the work on all seven of their houses.” Barack Obama, then a senator, deadpanned: “My middle name is actually Steve. Barack Steve Obama.” Both took time to compliment one another.

In 2012, Republican Nominee Mitt Romney made a point to praise President Obama, for his positive qualities.

“It would be easy to let a healthy competition give way to the personal and the petty but fortunately, we don’t carry the burden of disliking one another,” Romney said.

This year, it was different. Clinton took shot after shot at Trump.

“If you don’t like what I’m saying, feel free to stand up and yell “wrong!” Clinton told him, foreshadowing the next few minutes.

She needled him for losing the support of Republicans, suggested that he wasn’t a billionaire, and being egger to get into Twitter wars with celebrities.

“I am so flattered that Donald thought I was using a performance enhancer,” Clinton said of the debates. “Well actually I did, it’s called preparation.”

Meanwhile, Trump smiled at some of the jokes. She made a weak crack about Trump struggling to translate Russian off his teleprompter.

“There are a lot of friendly faces here in this room,” Clinton said smiling broadly. “I just want to put you all in a basket in adorables!”

The left-wing crowd reciprocated with a round of louder and warmer applause than they had spared for Trump.

When she was finished, Dolan rose from his seat between the two candidates, which he quipped was the “the iciest place on the planet.”

Trump leaned over, attempting to congratulate Clinton who had her back turned to him initially. Eventually, she turned and the two finally shook hands under the table.

For that, the night’s emcee offered one suggestion: “I think we should nominate Cardinal Dolan for the Nobel Peace Prize.”