The Israel Tax Authority today disclosed a multibillion shekel tax fraud, after an intelligence operation lasting several months. Tax Authority and Israel Police today arrested nine suspects and detained fifteen other people for questioning. The suspects include fuel traders, who allegedly distributed fictitious invoices to evade VAT on the excise component of fuel prices. The suspects are also being questioned about possible violations of the Prohibition of Money Laundering Law (5760-2000) and breaches of the Income Tax Directive.

The case is the largest-ever financial case every investigated by the Tax Authority, involving NIS 3.5 billion in transactions on which NIS 600 million in VAT should have been paid.

The overt investigation of the case began after a complex undercover investigation by the Tel Aviv and Central District Customs and VAT Investigations Office and the Tax Authority’s Special Targets Unit. The units set up a special joint task force with the Police. This morning, dozens of Tax Authority investigators and police detectives raided the suspects’ homes, offices, and businesses, conducted searches, seized computers, thousands of documents, hundreds of thousands of shekels in cash, and several luxury cars. Tax Authority dogs, trained to search for banknotes, participated in the raids. These dogs have participated in Tax Authority raids in money laundering cases.

Two of the fuel traders, one from the north and the other from the south, are suspected of conspiracy to defraud the Tax Authority through front companies and individuals, which distributed fictitious invoices to companies they own or control. These invoices totaled hundreds of millions of shekels, for the purpose of “financing” VAT on the fuel excise element of the price of fuel. In this way, they defrauded the Treasury of hundreds of millions of shekels.

The suspects will be brought before the Rishon LeZion Magistrates Court this afternoon for remand. 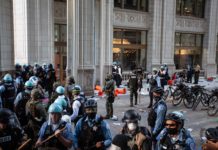 Study: Young People Who Use E-Cigarettes at Higher Risk of Contracting Coronavirus