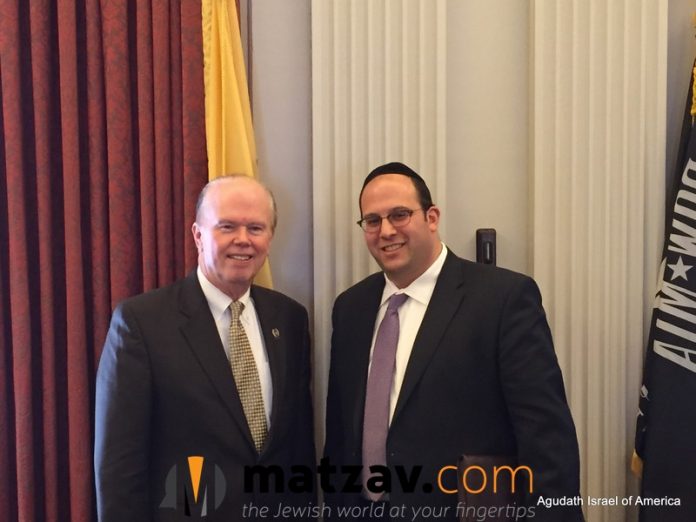 A new bill that would provide non-profit institutions in New Jersey with $10,000 grants that could be used to hire security guards cleared its first hurdle in the New Jersey State Senate on Monday after passing unanimously in the Senate’s Public Safety Committee.

The bill, S2634, was sponsored by Senate Majority Leader Loretta Weinberg and Senator Patrick Diegnan.  Among those who testified in Trenton in support of the bill was well known Edison community activist, Dr. Israel Rivkin, and Rabbi Avi Schnall, Agudath Israel of America’s New Jersey Director.

“We are so grateful to Senator Weinberg and Senator Diegnan for their support of this extremely important bill that will provide a critical layer of additional protection to our religious institutions,” said Rabbi Schnall.

If passed, the bill would allocate $1 million for security grants that would be open to any non-profit institution in New Jersey.  Rabbi Schnall noted that the $10,000 grants would cover the cost of hiring security guards at eligible places of worship for the holidays.

In addition to the state grant, non-profit institutions can also file for a federal homeland security grant which would provide eligible applicants with $75,000 for items that would enhance security including video cameras, perimeter fencing and similar items. The federal grant, however, would not cover the hiring of security personnel.

With a wave of anti-Semitic acts and threats sweeping the country, the timing of the New Jersey bill couldn’t be more fortuitous, noted Rabbi Schnall.

“New Jersey continues to lead the way when it comes to protecting our religious institutions,” observed Rabbi Schnall. “This bill would go a long way towards securing these facilities and protecting those who use them.”