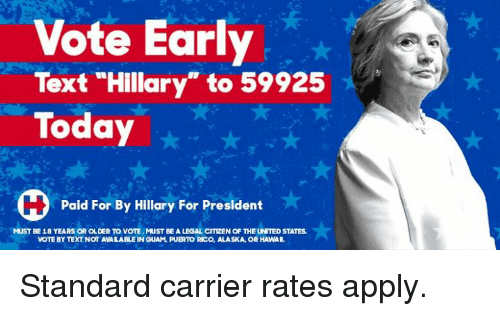 First things first: There is no such thing as voting by text message. Period. If you want to cast a ballot, you can vote at your polling station or vote absentee. That’s it.

But a series of ads circulated on Twitter recently would have you believe otherwise.

Lifting imagery directly from Hillary Clinton’s campaign materials, the ads encourage supporters of the Democratic nominee to “vote early” and “vote from home” by texting their candidate’s name to a random five-digit number.

“Save time. Avoid the line,” one reads.

At least four such ads began making rounds on social media this week, each containing the Clinton campaign’s “H” logo and a line saying they were “paid for by Hillary for President.” Some featured images of Clinton that appear to be pulled from actual campaign marketing materials, while others showed a black woman and a Hispanic woman, in what may be an attempt to dupe to minority voters.

The ads seemed to gain traction after Twitter user @TheRickyVaughn tweeted them out along with the pro-Clinton hashtag #ImWithHer. The user, who had roughly 11,000 followers before his account was suspended, has previously tweeted conspiracy theories and racial and homophobic slurs, and regularly linked to stories and polls favorable to Republican nominee Donald Trump.

The same user appears to have been the source of a tweet from Texas Agriculture Commissioner Sid Miller that drew widespread criticism on Tuesday. In the now-deleted tweet, Miller, a Republican who advises Trump, referred to Clinton as an obscene word for female genitalia, as The Washington Post reported. According to the Austin American-Statesman, the tweet appears to have been copied from posts by @TheRickyVaughn. Miller said his staff inadvertently retweeted the word.

Twitter user Robert McNees, an associate professor of physics at Loyola University Chicago, was among the first to alert Twitter moderators to the ads, questioning whether they violated the platform’s terms of service.

In a statement, Twitter initially told him they did not.

Later, however, Twitter started removing them and a spokesman told him the problem had been “fixed.”

Some of the accounts that circulated the ads appear to have been suspended, but users were still posting them on Wednesday morning.

Some people tried texting “Hillary” to the number listed. When they did, they got a variation of this response, according to Mashable:

“The ad you saw was not approved by iVisionMobile OR Hillary For America in any way. To opt-in to the real HFA list, text HFA to 47246. Reply STOP to cancel.”

In another election, the ads might have been dismissed as minor mischief. But in an election where both sides have raised concerns about voter suppression, they stirred fears that they may have been a legitimate attempt to confuse and intimidate voters.

Republicans and Trump supporters in particular have faced mounting accusations that they are actively trying to prevent minority voters from casting ballots next week. In North Carolina, a key battleground state, a federal appeals court over the summer struck down a GOP-backed voter identification law that it said targeted African Americans “with almost surgical precision,” specifically to stifle black turnout. Similar laws have been passed in about a dozen other states, with opponents saying they disproportionately affect minorities.

And as The Post’s Philip Bump reported last month, the Trump campaign is targeting young white liberals, young women and black voters with negative ads on social media. One senior campaign official characterized the effort this way in an interview with Bloomberg: “We have three major voter suppression operations under way.”