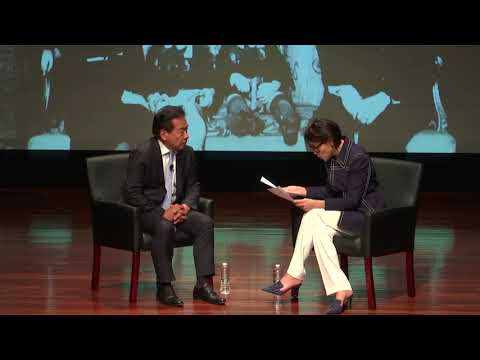 The Museum of Jewish Heritage – A Living Memorial to the Holocaust welcomed Nobuki Sugihara for an evening in conversation with journalist Ann Curry on May 22, 2019. Sugihara’s father, Chiune Sugihara, was a Japanese diplomat serving in Lithuania when it became clear that he could – at great risk to himself and his family – grant life-saving transit visas to desperate Jews trying to flee Nazi-occupied Europe during several frantic weeks in 1940. Of the 6,000 Jews he helped rescue, he said, “They were human beings and they needed help.”

In front of an overflowing audience, Nobuki recounted his father’s extraordinary story and met with 170 “Sugihara visa” survivors and their descendants, who are alive thanks to his selfless acts.

“An Evening with Nobuki Sugihara” was held in conjunction with the Museum’s current exhibition, Auschwitz. Not long ago. Not far away. The exhibition was produced in partnership with the international exhibition firm Musealia and the Auschwitz-Birkenau State Museum in Poland. It includes more than 700 original objects and 400 photographs, on view for the first time in the North America, including hundreds of personal items—such as suitcases, eyeglasses, and shoes—that belonged to survivors and victims of Auschwitz. An original transit visa issued by Chiune Sugihara is on display.

Among those who attended the talk was Nathan Lewin, 83, who was only four years old when Chiune Sugihara issued a transit visa to his family. His family was permitted safe transit through Russia. Mr. Lewin brought the aged and yellowed visa that allowed his family to escape the Holocaust to show to Mr. Sugihara.

During their conversation, Ann Curry described the disgrace Chiune Sugihara faced by disobeying orders that were given to him by the Japanese government. She asked Mr. Sugihara, “So the question is why? Why does a human being risk so much?”

“In 1969, I asked my father, ‘why did you decide to issue the visas?’ I thought he would say something great.  He just said ‘I pitied them. I knew the situation, how dangerous it was in Europe.’ But he hoped two or three people would succeed to get through those dark days, those terrible days. He never thought 100 people or 200 people would make it. Surprisingly, it’s tens of thousands. Some people say it is 250,000 with their descendants.”

Jack Kliger, President & CEO of the Museum of Jewish Heritage – A Living Memorial to the Holocaust, said, “It’s our great honor tonight to celebrate the legacy of Chiune Sugihara with his son. In the Museum’s new exhibition Auschwitz. Not long ago. Not far away. we have on display the transit visa issued for the Goldin family by Sugihara in 1940. It’s in an extraordinary section of the exhibition that highlights Sugihara’s bravery, and his decisive response to the desperation of thousands.”