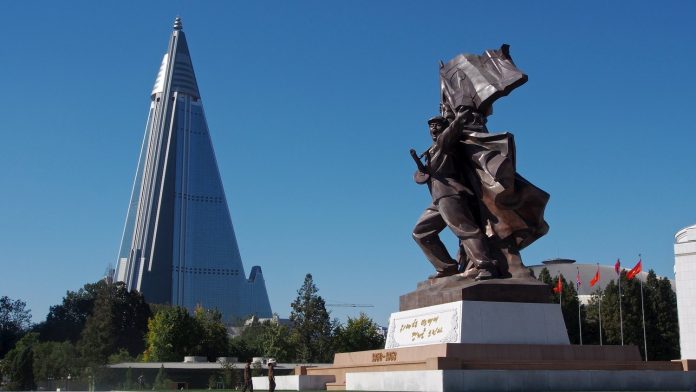 North Korea has the highest prevalence of modern slavery in the world, with 1 out of every 10 citizens victims under the practice, according to estimates included in a new report.

More than 2.6 million people live under modern slavery in the country, the 2018 Global Slavery Index found, with the vast majority forced to work by the state. The report also argued that the North Korean government had the weakest response to slavery out of all the countries surveyed, as the North Korean state itself is involved in forced labor both inside and outside of the country.

The report defines modern slavery as slavery itself, as well as human trafficking, forced labor, debt bondage, forced or servile marriage, and the sale and exploitation of children.

The findings come amid ongoing negotiations between North Korea and the United States, as well as concurrent inter-Korean talks with South Korea. These talks have focused on denuclearization and military issues rather than human rights issues such as slavery.

“There’s a strong focus on bombs and missiles, but the North Korean tragedy is much more about lost freedom through the brutal suppression of human potential,” said Andrew Forrest, founder of the Walk Free Foundation.

Under the leadership of Forrest, an Australian mining magnate turned anti-slavery campaigner, Walk Free has published the Global Slavery Index since 2013. The index aims to estimate the number of modern slaves in a country, rather than just count reported cases, as the organization argues the illicit and generally secret practice is more widespread than records show.

In the past some experts, such as human trafficking scholar Anne Gallagher, have criticized the methodology of Walk Free’s estimates, though the organization has revised its process a number of times in response to criticism. Last year, it joined with the U.N.-affiliated International Labor Office (ILO) to release a report that estimated 40.3 million people were in some form of modern slavery around the world on any given day last year.

For this year’s index, Walk Free teamed up with Leiden Asia Centre and the Seoul-based Database Center for North Korean Human Rights (NKDB) in a bid to reach accurate estimates for North Korea, arguably the most secretive nation on earth.

During the research, they conducted interviews with 50 North Korean defectors, all but one of whom said they had been subjected to conditions that met the international legal definition of “forced labor,” according to the index.

“While the information vacuum poses challenges, we are confident that the data reflects the most accurate estimation on the pervasiveness of modern-day slavery inside North Korea,” said Fiona David, Walk Free’s executive director of global research, noting that the research had also involved looking at a variety of preexisting data from international organizations and nonprofits.

Amanda Mortwedt Oh of the Committee for Human Rights in North Korea, an organization not affiliated with the research, said she was curious why the 2018 estimate was more than double a 2016 Global Slavery Index estimate. However, she did not dispute the core findings.

“North Korea is essentially a slave state that uses its own citizens for the Kim regime’s benefit,” Mortwedt Oh said, referring to the government led by Kim Jong Un and his father and grandfather before him.

In 2014, the U.N. Commission of Inquiry on Human Rights in North Korea released a report that found that because of the scale of its human rights violations, North Korea “does not have any parallel in the contemporary world.” The report highlighted North Korea’s political prison camp system: Recent estimates have suggested that as many as 130,000 people were being held in four camps for alleged “political crimes.”

North Korea recently announced an amnesty from Aug. 1 for people “convicted of the crimes against the country and people” to coincide with the 70th anniversary of the foundation of the country. Human rights groups have cautioned that there have been previous announcements in previous years and that it was not clear if a significant number of people would be released.

Forrest said that the slavery data showed the need for international pressure.

“The implementation of mass forced-labor programs, and the sheer scale of modern slavery within North Korea, is the regime’s biggest crime,” Forrest said. “Internationally, both in the U.S., Europe and beyond, we need to put this issue front and center of all discussions with Kim Jong Un, and demand immediate freedom as part of any diplomacy or cooperation with North Korea.”

The Global Slavery Index found that outside of North Korea, the countries with the worst prevalence of slavery were Eritrea, Burundi, the Central African Republic, Afghanistan, Mauritania, South Sudan, Pakistan, Cambodia and Iran. The report noted that other countries were often complicit through the import of goods at risk of being produced through forced labor – with the United States importing the most at-risk goods of any nations, at $144 billion a year.