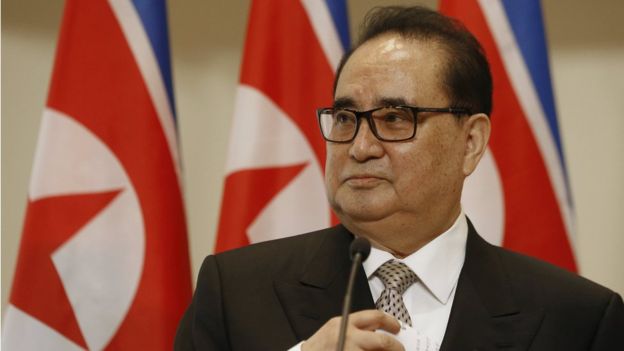 North Korea spurned harsh new U.N. sanctions Monday and threatened to defend itself with nuclear weapons if necessary, as Secretary of State Rex Tillerson repeated an offer to bargain with the outcast nation under the right circumstances.

There was no sign at a major Asian security conference here that the sanctions hailed by President Trump as a foreign policy achievement would succeed where past efforts have failed in persuading the country to give up its nuclear weapons.

North Korean Foreign Minister Ri Yong Ho told diplomats that his country will never negotiate away what he called a rational “strategic option” against the threat of attack from the United States.

“We will, under no circumstances, put the nukes and ballistic rockets” up for negotiation, Ri said in prepared remarks, adding that the entire United States is within range of its missiles.

He dismissed the U.N. Security Council sanctions approved Saturday as illegal, appearing to rule out talks that the Trump administration, in a diplomatic partnership with China and Russia, is offering North Korea as a way out of its economic and diplomatic pariah status.

“The best signal that North Korea could send that they’re prepared to talk would be to stop these missile launches,” Tillerson told reporters Monday at the Association of Southeast Asian Nations (ASEAN) gathering.

The security conference in the Philippine capital was dominated by the rising threat posed by North Korea’s rapid advances in nuclear and ballistic missile technology. Those capabilities are already a threat to neighbors and U.S. allies South Korea and Japan. In two tests last month, North Korea demonstrated that it could hit major population centers in the United States, and the country is now working to perfect the technology to allow those missiles to carry nuclear warheads.

The new economic sanctions were approved amid the discussions here. The penalties are the toughest to date against a country that has been under international sanctions for more than a decade, and they carry the symbolic weight of approval by Pyongyang’s closest ally, China. They also approximate a trade embargo by targeting some of North Korea’s biggest exports, including coal.

The sanctions can work only if North Korean leader Kim Jong Un concludes that he has too much to lose by hanging on to his weapons. Kim’s calculation has been the opposite – that his weapons and the means to deliver them buy him irreplaceable leverage over the United States, his principal adversary.

China is urging Kim to consider negotiations, and also worked alongside the United States to develop the new U.N. sanctions. Days before the unanimous Security Council vote, Tillerson had made a point of saying that the United States does not consider North Korea its enemy and does not seek to invade or unseat Kim. Those reassurances were meant to encourage North Korea to meet at the bargaining table.

At the same time, Washington has issued blunt warnings that the United States will use military force if necessary, and North Korea has answered in kind.

In the printed version of his speech, Ri said Pyongyang will use nuclear weapons only against the United States or any other country that might join it in military action against North Korea.

Ri’s address here was closed to the media, so it could not be determined whether he stuck to a script delivered to reporters.

Another direct warning was aimed at the United States in a government statement published by the state-run Korean Central News Agency.

“There is no bigger mistake than the United States believing that its land is safe across the ocean,” it said.

North Korea “will make the U.S. pay dearly for all the heinous crimes it commits against the state and people of this country,” the statement said.

Tillerson would not spell out a deadline for North Korea to respond to the diplomatic overture.

“We’ll know it when we see it,” he said Monday.

“We hope again that this ultimately will result in North Korea coming to a conclusion to choose a different pathway, and when the conditions are right that we can sit and have a dialogue around the future of North Korea so that they feel secure and prosper economically,” he told reporters.

Tillerson avoided running into Ri, who attended the related ASEAN Regional Forum. The State Department said he skipped one event where the two men might have met and left another early to attend a scheduled meeting with Philippine President Rodrigo Duterte.

Tillerson and Trump spoke by phone for about an hour Monday, and Tillerson detailed the results of his discussions in Manila, the White House said.

“United Nations Resolution is the single largest economic sanctions package ever on North Korea,” Trump wrote in a Twitter message Saturday. “Over one billion dollars in cost to N.K.”

A day later, he noted that he had discussed the new package with South Korean President Moon Jae-in.

North Korea rarely attends, or is even invited to, international forums such as the ASEAN meeting. Ri tried to make the most of it, holding meetings with the top diplomats from China and Russia, two countries that trade with North Korea and employ North Koreans as contract workers. China alone is responsible for 90 percent of North Korea’s trade.

Moscow and Beijing have proposed a “freeze for a freeze” approach, in which North Korea would suspend its missile and nuclear testing if the United States and its allies stop conducting joint military exercises in the region. Washington has rejected that.

After meeting with Ri, Russian Foreign Minister Sergei Lavrov called on all parties “to show maximum restraint to avoid the projection of military power on the Korean Peninsula and immediately start seeking a political and diplomatic resolution to the problems of the peninsula, including its denuclearization.”

Chinese Foreign Minister Wang Yi said he told Ri that North Korea should abide by U.N. prohibitions against missile and nuclear testing. But he also said that sanctions, while needed, “are not the final goal,” and he called for dialogue. Wang urged the United States and South Korea, as well as the North, not to increase tensions, saying the situation already is at a “critical point.”

Chinese state media on Monday acknowledged that North Korea had to be punished for its missile tests, but criticized the United States for its “arrogance.”

The effectiveness of the new sanctions depends on how well China, in particular, decides to enforce them, said Michael J. Green of the Center for Strategic and International Studies, who was an Asia export in the George W. Bush administration.

More broadly, Green said, the time for effective diplomacy has almost certainly run out. There is little to no chance that North Korea can be talked out of weapons it considers essential, he said.

“The North Korea strategy for decades has involved both carrots and sticks. The problem is that the carrots are no longer credible,” he said.