The missiles, launched from the city of Wonsan, likely flew about 155 miles at a maximum height of 19 miles, South Korea’s Joint Chiefs of Staff said in a statement, according to The Associated Press. 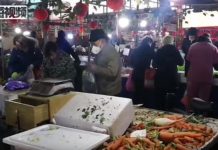