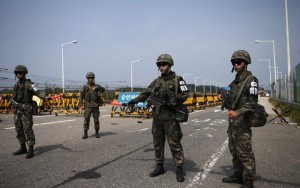 North and South Korea have agreed on a deal to reduce tensions along their border and avoid war, reports South Korean news agency Yonhap.

Tensions between the two countries escalated last week after the South broadcast propaganda across the demilitarized zone over loudspeakers, which followed a North Korean land mine injuring several South Korean soldiers.

The two countries even exchanged artillery fire before it was all over. North and South Korea have now agreed to attempt to reunite family members torn apart by the countries’ division. Read more at BBC News.