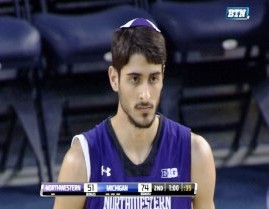 According to an article in the Chicago Sun Times last month, Liberman, a 6-foot-10, 215-pound forward from Valley Torah High, in Los Angeles, is only the second Division I player to ever wear a yarmulke on the court. The only other player to do so was Tamir “Jewish Jordan” Goodman, who played for Towson in 2000 and 2001.

Liberman led Valley Torah to a 25-5 record and a CIF Southern Section championship as a senior, the first time a Jewish school had claimed a section title in basketball in California. Liberman then spent a year in Israel before coming to Northwestern, the Chicago Sun Times reported.

Despite the extra help from above, Northwestern on Sunday lost 74-51 at Michigan.