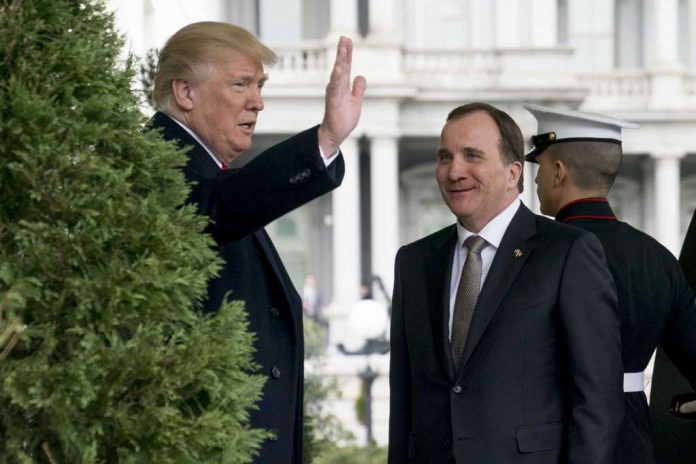 For most of the past 19 months, President Donald Trump’s war of words with American news organizations has been more of a one-sided barrage – at least according to the Boston Globe’s editorial board.

Trump labeled the news media “the enemy of the American people.” a month after taking the oath of office. In the year that followed, a CNN analysis concluded, he used the word “fake” – as in “fake news,” “fake stories,” “fake media” or “fake polls” – more than 400 times. He once fumed, the New York Times reported, because a TV on Air Force One was tuned to CNN.

And last week, at a political rally in Pennsylvania, Trump told his audience that the media was “fake, fake disgusting news.”

“What ever happened to honest reporting?” he asked the crowd. Then he pointed to a group of journalists covering the event. “They don’t report it. They only make up stories.”

Now, the editorial board of the Boston Globe is proposing that newspapers across the nation express their disdain for the president’s rhetoric on Aug. 16 with the best weapon they have: their collective voice.

The rally calls for the opinion writers that staff newspaper editorial boards to produce independent opinion pieces about Trump’s attacks on the press. So far, according to the Associated Press, 70 news organizations have agreed – from large metropolitan daily newspapers like the Miami Herald and Denver Post to small weekly newspapers with four-digit circulation numbers.

The Globe’s appeal is limited to newspaper opinion writers, who operate independently from news reporters and editors. As The Post’s policy explains, the separation is intended to serve the reader, “who is entitled to the facts in the news columns and to opinions on the editorial and ‘op-ed’ pages.”

“We are not the enemy of the people,” Marjorie Pritchard, deputy managing editor for the editorial page of the Boston Globe, told the Associated Press, using a term Trump has used to describe journalists in the past.

”Our words will differ. But at least we can agree that such attacks are alarming,” the appeal said.

The newspaper’s rallying cry was being promoted by industry groups like the American Society of News Editors.

On one side, are people like Washington Post editor Martin Baron, who told the Code Media conference in California: “The way I view it is, we’re not at war with the administration, we’re at work. We’re doing our jobs.”

Baron told interviewers that The Post would have approached a Hillary Clinton administration with the same aggressive reporting.

But in a conversation on Twitter, Jay Rosen, a press critic and journalism professor, said journalists’ defending themselves was consistent with the chief journalism aim of telling the truth:

“The problem, of course, is that there is war on the press being conducted by the president of the United States and his supporters. To say otherwise would violate a different commandment. Yes, it’s imperative to keep your cool. It is equally imperative to state what is true.”

Others have argued that there’s a moral imperative to speak up because Trump’s rhetoric can result in more than words being hurled toward journalists.

Some have pointed to the killing of five people who worked at the Capitol Gazette in Annapolis as an example. The man charged with five counts of murder in the killings had a vendetta against the newspaper, authorities said. But critics have said Trump’s anti-media comments do not help.

“What’s clear is that Trump has made it a verbal open season on journalists, many of whom have felt the sting one way or another,” columnist Kathleen Parker wrote in The Washington Post on June 29. “For all of us ink-stained wretches, the hate mail is more vicious than ever. The death threats more frequent.

“He continues: ‘I don’t carry an AR but once we start shooting you you aren’t going to pop off like you do now. You’re worthless, the press is the enemy of the United States people and, you know what, rather than me shoot you, I hope a Mexican (…) shoots you in the head, dead.'”

The Washington Post editorial board has previously responded to Trump’s attacks on news organizations, but Editorial Page Editor Fred Hiatt said late Saturday that the board will not participate in the organized response.