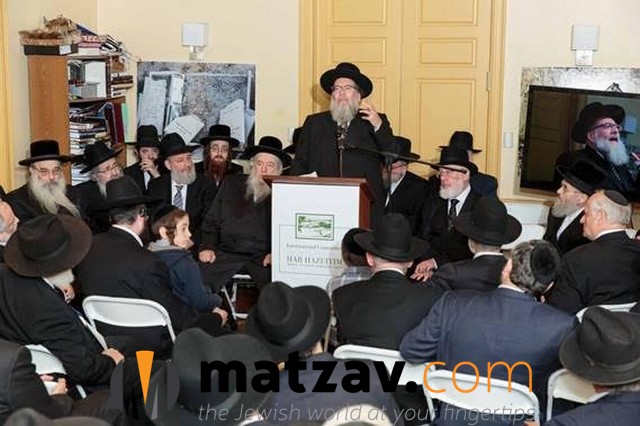 Calling Har Hazeisim a “Jewish treasure that must be returned to its original glory – hashovas aveida,” Rabbi Yaakov Perlow, the Novominsker Rebbe and Rosh Agudas Yisroel, praised the activists who took the initiative to preserve Har Hazeisim. “It properly belonged to the Israeli government all these years but perhaps we were given a chance to participate in this z’chus,” the Rebbe noted. He assured the large turnout that “anyone who is involved in securing and preserving Har Hazeisim “will be rewarded in this world and the world to come.” The occasion was the 3rd annual breakfast meeting hosted by Harav Moshe Tuvia Lieff, the Rav of Agudas Yisroel, Bais Binyomin to support the efforts of the International Committee for the Preservation of Har Hazeisim (ICPHH).  Rabbi Lieff in his eloquent message said that the Arabs “uprooted 65,000 graves to build not only hotels and roads, but villages that surround Har Hazeisim and are built on top of graves. He added: “Instead of burying these holy tzaddikim and leaders of our people, they bulldozed the bodies just as the Nazis had done.” 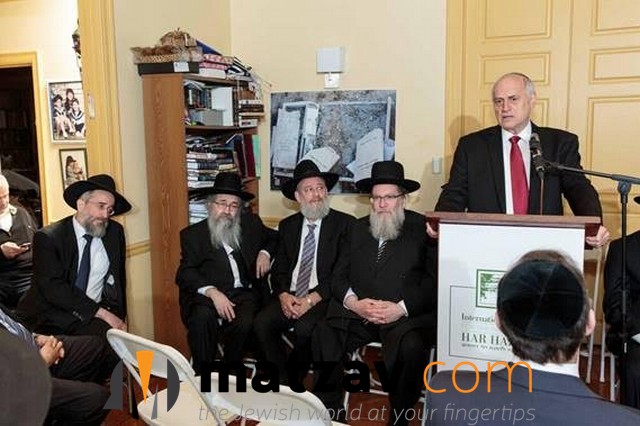 Malcolm Hoenlein, Vice Chairman of the Conference of Presidents of Major American Jewish Organizations, and a key member of the ICPHH, said that the desecration and abuse of Har Hazeisim is nothing short of an attempt to “deny us our past for they know that to deny us our past is also to rob us of our future.” He criticized a recent resolution of UNESCO denying the Jewish claim to such holy sites as the kosel hamaravi as well as to intimate that Jews planted “fake graves on Har Hazeisim.”

Menachem Lubinsky, co-chair of the ICPHH, told the crowd that “Har Hazeisim is safe.” He reported on increased security with added patrols by police and border patrol units, the effectiveness of the cameras, the imminent installation of a wall, new tougher laws, and a far more serious approach by government to preserving the 3,000-year old cemetery with its 150,000 neshomos dating back to the Nevi’im – Zecharia Malachi and Chagai as well as Chulda. He praised a recent cabinet decision to significantly step up the security od=f East Yerushalayim including the hiring of some 4,000 police officers, with at least 1,500 being assigned to East Yerushalayim and Har Hazeisim.

Lubinsky also revealed that the ICPHH is joining the government in building a $10 million Visitor’s Center and shul to encourage Jews to visit the historic international cemetery of the Jewish people. In the past year, more than 350,000 Jews visited the gravesite of the tomb of the saintly Orach Chaim where access has been fixed up. A delegation of 150 participants to the annual Yarchei Kallah of Agudath Israel of America also toured the historic cemetery in January. This past Pesach, nearly 4,000 Jews participated in an “aliyas haregel” event jointly sponsored by the Ministry of Culture, under Minister Miri Regev, the Municipality of Jerusalem, and the ICPHH. The ICPHH plans to mobilize world Jewry in restoring the 23,000 graves that remain destroyed since the Jordanian occupation.

The gathering attracted many leading rabbonim from Flatbush, Boro Park and other communities. The rabbonim were urged to organize efforts in their shuls to “adopt” some of the luminaries that are amongst the 23,000 graves to be restored. A special video presentation prepared for the event vividly described the accomplishments of the ICPHH but also pointed out the dangers that still loom ahead, which will require constant village by the Committee. The ICPHH noted that there were more than 300 incidents on and around Har Hazeisim in April 2015 but only a handful this April with no grave desecrations.

Avrohom Lubinsky, founder and chairman of the ICPHH said: “The large turnout by Jews of all backgrounds including leading rabbonim clearly demonstrates just how important this cause is to every Jew.” He had particular praise for Rabbi Lieff who despite being a leading rav in the community opens his home for this cause.