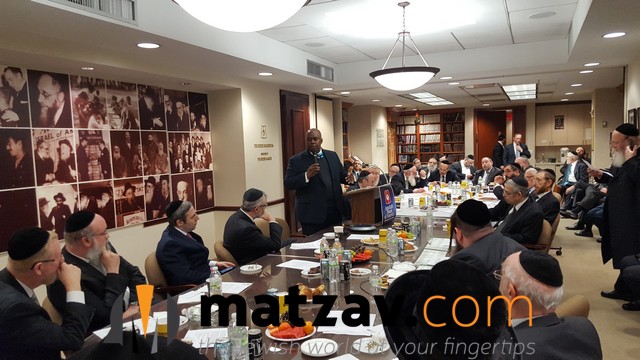 >>Follow Matzav On Whatsapp!<<
The National Officers and Vaad Hanhala of Agudath Israel of America convened at the organization’s headquarters in Lower Manhattan on Wednesday April 6, with the subject of mental health services in the Orthodox Jewish community topping the evening’s agenda. New York City Deputy Mayor for Strategic Policy Initiatives Richard Buery joined the discussion to brief the participants on Thrive  NYC, the new city initiative to improve mental health care.
Introduced by Rabbi Chaim Dovid Zwiebel, Agudath Israel’s Executive Vice President, Deputy Mayor Buery eloquently described a number of components of the initiative including a dedicated mental health phone line, the certification and placement of mental health professionals in schools, and mental health first aid training for 250,000 New Yorkers. Thrive NYC represents an investment of $850 million over the next four years.
After the Deputy Mayor concluded his remarks, a number of prominent mental health experts from the Jewish community described the array of mental health services in the Orthodox Jewish Community and ways to improve. The panel included Rabbi Binyomin Babad of Relief Resources, Rabbi Simcha Feuerman of Ohel Children’s Home and Family Services, and noted psychologist Dr. Benzion Twerski. The session was chaired by Rabbi Labish Becker, Agudath Israel’s Executive Director.
Rabbi Becker discussed Agudath Israel’s long-time involvement in fostering a new generation of stable, healthy and resilient children through its Bnos and Pirchei Youth Programs, which impact the lives of more than 20,000 children. He also pointed to Agudath Israel’s key role in the United Task Force on Families and Children which brings together 40 Orthodox Jewish mental health agencies serving the community.
Deputy Mayor Buery said, “Our commitment is to change the face of mental health in our city. I want you to know you have a real partner in making sure that the members of this community, the people that you serve and support, can live lives of dignity and health, and I’m so happy to serve you all.”
The Agudath Israel lay leaders also covered the organization’s upcoming annual dinner, outcomes of its recent Mission to Albany, and its role in this year’s presidential elections.
Rabbi Zwiebel expressed great satisfaction at the tenor of the meeting. “We thank Deputy Mayor Buery for taking the time to visit us and make such a beautiful presentation. This was the start of a dialogue that has the potential to lead to significant benefits for the well-being of the Orthodox Jewish community in New York City.”
{Matzav.com}