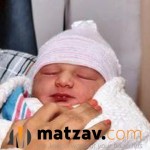 New York City’s first baby of 2016 was born exactly at the stroke of midnight in Glen Oaks.

The baby boy was born to Eli and Daniella Malakov of Forest Hills, Queens, at Northwell Long Island Jewish Medical Center at exactly 12 a.m. Friday morning. The baby won’t be named until his bris this week.

Daniella says she and the baby are doing just fine, reports NY1. She says she never expected to give birth to the year’s first baby in the borough.

“I’ve been a nurse here at Northwell Health, LIJ, for 28 years and in 28 years I have never had a baby deliver exactly at 12 o’clock,” added Labor and Delivery nurse Patricia Garofalo.

Another baby boy was born exactly at midnight in Brooklyn. Zayden Noel Staley came into the world at Coney Island Hospital, born to parents Paul Staley and Stephanie Diaz. Officials say that the two babies born at midnight in New York City will share the claim for “first baby of 2016.”

Either way, we wish the Malakov family much nachas and bracha, and may the bris be b’shaah tovah umutzlachas.

Leave a Reply to Yid in BP Cancel reply