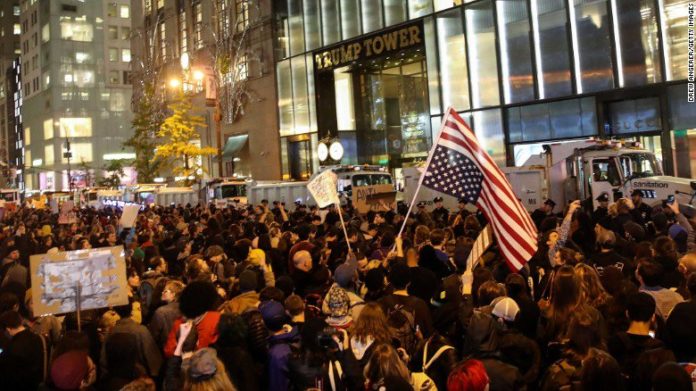 Police finally enforced an 8 p.m. curfew Thursday evening by busting up protests across the city — making dozens of arrests, the NY Post reports.

Thousands of protesters had continued to march in defiance of the deadline, including in Upper Manhattan, in the Bronx and in Brooklyn, on the eighth day of citywide demonstrations against police brutality.

An approximately 100-person demonstration in the Bronx organized by activist group DecolonizeThisPlace, devolved into chaos when NYPD cops in riot gear blocked off the march near East 136th Street and Brook Avenue. The marchers chanted “let us go,” but their pleas fell on deaf ears.

Just minutes after 8 p.m., cops stormed in to make arrests. They were seen pulling individual protesters out of the melee, placing them in zip ties and taking them into vans, as a recording about the curfew played.

Meanwhile, roughly 200 protesters were followed by cops as they went north at Central Park West and ran into another line of police at around 108th Street.

“It was a peaceful protest,” one marcher told The Post. “Then, all of a sudden, ‘Boom.’ They came from all sides. They kettled us. There was no warning. There was no, ‘There’s a curfew. It’s time go home home.”

On the Upper East Side, TV-footage showed at least a dozen people being placed in handcuffs and taken into police vans for being out past deadline.

Another group of 10 people was spotted at 66th Street and Madison Avenue, sitting on the curb with their hands tied behind their backs, video showed.