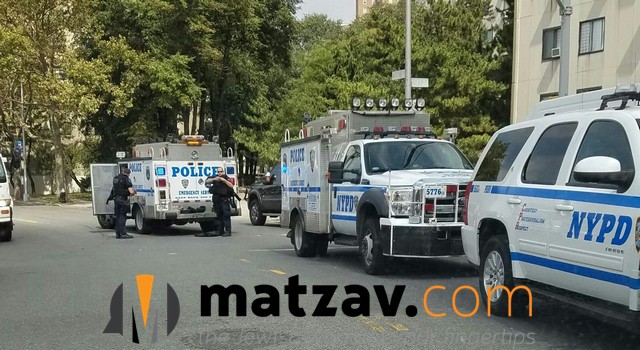 Authorities in New York were sharply critical today of a police sergeant responding to a call about an “emotionally disturbed person” on Tuesday night who officials said fatally shot a 66-year-old woman wielding a baseball bat.

Police said they were investigating the shooting, which occurred in the Bronx apartment of Deborah Danner, a woman who authorities said was known to officers after previous calls regarding her mental illness. In blunt public statements on Wednesday, officials said Sgt. Hugh Barry did not follow his training and said they were seeking to determine why he fired his gun rather than his Taser.

New York Police Commissioner James O’Neill said earlier Wednesday that “we failed” and he wanted to know why.

“Every life to me is precious,” O’Neill said during a briefing. “I think that we’ve been in this business a very long time, we’ve established procedures and protocols for handling emotionally disturbed people. That’s to keep everybody safe, that’s to keep the cops safe, the community safe and the person that we’re dealing with safe.”

O’Neill said that while the department has protocols governing such calls, “it looks like some of those procedures weren’t followed.” He pledged that police and prosecutors would investigate the shooting to “figure out what went wrong.”

Police in New York have responded to more than 128,000 calls regarding people suffering emotional disturbances, said de Blasio, who was unaccompanied by police officials when he spoke and said he had discussed the incident with O’Neill.

Melissa Mark-Viverito, speaker of the New York City Council, echoed these comments and said she was “deeply troubled” by the shooting. “Deborah Danner should have been helped, not killed,” she said in a statement.

According to a narrative released by the police department, officers responded to a neighbor’s 911 call shortly after after 6 p.m. Tuesday and headed to Danner’s seventh-floor apartment on Pugsley Avenue.

When Barry went inside at about 6:15 p.m., Danner was holding scissors, Nikunen said. The sergeant talked with Danner and persuaded her to put the scissors down, but she then picked up a baseball bat and tried to hit Barry, prompting him to fire two shots at her torso, Nikunen said.

Danner was taken to Jacobi Hospital and pronounced dead.

While Nikunen began reading his remarks, a voice in the crowd yelled out, “Black lives matter.”

O’Neill said that Barry had attended training in 2014 that focused on de-escalating situations. Barry has been placed on modified duty and stripped of his badge and gun, de Blasio said.

“While I certainly understand the hard work that our police officers undertake to keep the streets of our city safe every single day, I also know what excessive force looks like,” Diaz said in a statement late Tuesday. “This elderly woman was known to the police department, yet the officer involved in this shooting failed to use discretion to either talk her down from her episode or, barring that, to use his stun gun. That is totally unacceptable.”

Diaz compared the shooting of Danner to the death of Eleanor Bumpurs, a mentally ill grandmother in the Bronx shot and killed by police in 1984. The police officer who fired the fatal shotgun blasts that killed Bumpurs was later acquitted.

“Hasn’t anything changed over the last 32 years?” he said.

A spokeswoman for New York State Attorney General Eric Schneiderman said that his office was “reviewing the incident to determine whether or not it falls within” his jurisdiction under an executive order, signed last year, designating him as a special prosecutor for some deaths at the hands of police and letting him review certain cases.

“We extend our deepest condolences to Ms. Danner’s family,” Amy Spitalnick, the spokeswoman, said in a statement.

Danner was among at least 772 people fatally shot by a police officer this year, according to a Washington Post database tracking such shootings.

About a quarter of these shootings involved people who were reported to be mentally ill or suffering an emotional crisis, The Post’s database shows, a similar share to what was found last year.

Experts say these kinds of shootings highlight an issue involving just how often police are called to respond to someone suffering from either a mental or emotional crisis and whether officers are properly trained to handle such calls.

In most cases last year involving people with mental illness fatally shot by officers, authorities were responding after a relative or bystander called because they were worried about the person’s erratic behavior.

Just two days before the Bronx shooting, police in Texas fatally shot a woman whose husband had called 911 seeking a mental health officer and warning that his wife had picked up a gun.

Authorities said that Micah Dsheigh Jester, the Austin woman, pointed a weapon at officers saying, “Shoot me. Shoot me. Kill me,” and that she kept approaching them, prompting two officers to shoot her.

She fell to the sidewalk, injured but alive, still asking the officers to shoot her and not putting down her weapon, police said. They fired again and she was pronounced dead not long after. It later turned out her weapon was a replica BB gun, which can often appear real to police officers.

On Monday, a day before Danner was shot in New York, police in El Cajon said they arrested eight people who had gathered and were angry a memorial for Olango had been removed. Authorities said some officers had been assaulted, and police said one person at the scene had pulled out a handgun before being tackled by demonstrators.